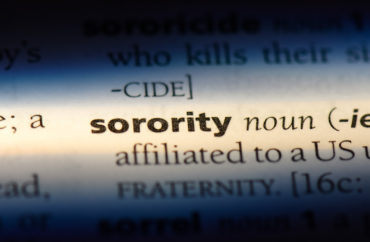 One sorority defends itself: ‘Our chapter…followed all of the standard procedures’

Sororities at George Mason University in Fairfax County, Virginia, are remaining tight-lipped after an intellectually disabled student on the university’s cheerleading team was not invited to join any of the Greek organizations during recruitment.

AnnCatherine Heigl is a sophomore at George Mason and is a flier for George Mason University’s Division I cheer team. She is attending the university as part of the school’s LIFE Program, an initiative that provides “an innovative post-secondary program for young adults with intellectual and developmental disabilities.”

According to a letter posted on Twitter by her sister Lillie, Heigl was turned down by every sorority she rushed at George Mason this semester. Lillie claimed that the rejection left Heigl feeling “unwanted and devastated.”

“I firmly believe that if a typical student had gone through recruitment, as a D1 cheerleader, they would have gotten a bid; I believe that AnnCatherine wasn’t extended a bid because she’s a woman with a disability,” Lillie wrote.

“There were less than 300 women in @GMUPanhellenic recruitment this year and there are 8 chapters,” Lillie wrote in another tweet. “I refuse to believe that based on these numbers there isn’t a single chapter that had a spot for AC. Her resume speaks for itself. The problem was that disabilities are unwanted.”

Seven of the eight sororities on George Mason’s campus did not respond to The Fix’s requests for comment. Lauren Felts, a spokeswoman for Alpha Xi Delta, told The Fix via email that while the organization’s privacy rules prevented her from sharing membership selection information, the GMU chapter “followed all of the standard procedures for membership selection during the formal recruitment process.”

Asked if the sorority has ever had a member with Down syndrome, Felts replied: “On a national level, yes. We know of women who have Down syndrome who are members of Alpha Xi Delta.”

Felts supplied The Fix with the sorority’s nondiscrimination policy. That policy does not appear to directly forbid discrimination against members with Down syndrome. Rather, it states that the sorority “believes it is inherent in our principles not to discriminate on the basis of religion, race, national origin, disability, sexual orientation, veteran status, citizenship, or age.”

Pressed on the fact that the policy seems to allow discrimination, Felts denied that it does.

“The nondiscrimination policy is a policy in Alpha Xi Delta’s Constitution and Bylaws and all chapters and Sisters are required to uphold these policies,” she said. Felts did not immediately respond to a subsequent email regarding the policy. Following the publication of this article, Felts wrote to The College Fix:

[A]ny sister or chapter operating in a way that is contrary to our “principles” is not acting as a sister or representative of our organization…[W]e understand that a violation of our “principles” is a violation of everything we hold dear.  As such, we believe our members understand that discrimination on these bases is prohibited if one wants to remain a member and/or chapter of Alpha Xi Delta.

In a statement on the controversy, George Mason University’s Panhellenic Council said: “Over the past year, we have placed an emphasis on ensuring that George Mason’s values of diversity and inclusion are a priority for our Panhellenic community.” Though the group said that recruitment is open to any “students who identify as female, including those enrolled in the MasonLIFE program,” it also stated that the council does “not possess the ability to dictate our chapters’ membership or the process of selecting new members.”

The Fix contacted the council for a comment. The council did not respond.

MORE: Sorority accepts its first sister with Down Syndrome

MORE: This autistic student asked for a ‘fist bump’ and a selfie. He got two Title IX investigations.