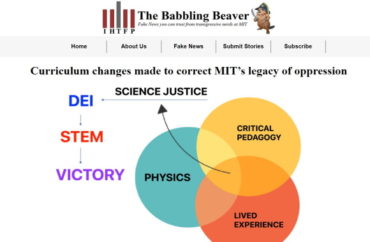 “Menstruation Scientists claim that 20% of MIT women are impaired at work.”

“In order to save Democracy from misinformation, we need more mob rule.”

These headlines represent a sampling of recent posts at The Babbling Beaver, a satirical website that aims to mock woke trends taking over the venerable Massachusetts Institute of Technology.

“What we hope to accomplish is liberating the mouths and then the minds of the majority of college students and professors who we believe have been terrorized, silenced, and oppressed by the Woke Pandemic,” the Beaver’s editors said in an email to The College Fix on the condition of anonymity.

“…Our battle cry is, ‘Fight to save STEM! Send the moron social justice warriors back to Oberlin!'”

The Beaver launched in January 2020, and others have followed suit, most recently The Babbling Bear at Cornell University, which debuted last month.

Its faculty creator told The College Fix the idea behind it is “speaking parody to power.” So far its headlines have included “To Be Diverse, We Must Fight Viewpoint Diversity” and “The Bill of Lefts.”

A third campus getting in on the action is The Flickering Beacon at the University of Massachusetts Boston. It is also run by faculty members who told The Fix that after George Floyd’s death, “our university declared itself a ‘leading anti-racist and health promoting institution’ like many others at the time.”

The university’s leaders, during the height of the pandemic, “took advantage of the distance, isolation and confusion to implement a number of very questionable steps in a very top-down fashion — no room for discussion or input, completely ignoring any feedback from the university community,” they said.

“They also started bombarding us with incessant messages about ‘anti-racism,’ ‘equity,’ ‘restorative justice’ and ‘inclusive excellence’ as if it’s the only thing that they cared about,” the professors told The Fix.

“We found the imposition of this ideology completely incompatible with the notion of a public university, the free exchange of ideas, and most importantly – with science itself,” they said.

The Flickering Beacon launched in May 2022 and has managed to “piss off” a few people on campus, they said.

“We mainly hope to achieve a good chuckle, find a creative outlet, and maybe, just maybe, get someone up there [in administration] to listen,” the two professors said.

“Every satire has a lot of seriousness behind it, and our ultimate goal is exposing the emptiness and hypocrisy hiding behind the fancy but confusing and vague buzzwords like ‘equity,’ ‘social justice’ and ‘inclusive excellence’ – words thrown around incessantly without meaning what most people think they mean,” they said.

“These terms symbolize the erosion of the academic standards in research and teaching, and it will eventually hurt everyone, especially the people it pretends to help.”

The Babbling Beaver has been at it the longest of the three. The website has garnered about 80,000 pageviews so far. It is independent of the MIT Free Speech Alliance, but applauds and supports its cause, the editors said.

“While the MIT Free Speech Alliance is narrowly focused on the issues of free speech, viewpoint diversity, and academic freedom – pursuing a totally nonpartisan approach – we at the Beaver are ruthless piratical partisans, mercilessly lampooning after ever form of woke mental illness in all of its manifestations, sparing neither the perpetrators, fellow travelers, or useful idiots who form the Zombie Army of the Woke,” its editors said via email.

Taking a page from Saul Alinsky’s “Rules for Radicals,” they point out “ridicule is a man’s most potent weapon.”

“Although the Beaver is focused on MIT, our secret plan is to spawn anti-woke satire webzines on every college campus in America,” its editors said. “There are now three in our merry band. … We offer not only our technical assistance but a template copy of our WordPress website to any fledging publisher who wants to join our acerbic armada.”