‘Unsubstantiated and inflammatory claims that advance a racist narrative’

“We ultimately declined to publish it because it included unsubstantiated and inflammatory claims that advanced a racist narrative, emphasizing violence committed by protestors while ignoring police brutality,” Stanford Daily Editor-in-Chief Charlie Curnin said in an email to The College Fix.

Another student-led campus publication, The Stanford Review, did eventually publish Sills’ column after the Daily refused. The Review did not respond to requests for comment.

In his op-ed, Sills condemns Stanford Dean of Students Mona Hicks for quoting in an email to students Assata Shakur, a convicted cop-killer and one of the FBI’s most-wanted terrorists.

“The endorsement of those who perpetrate political violence from the very individuals who are supposed to steward our campus community is intolerable,” Sills wrote. 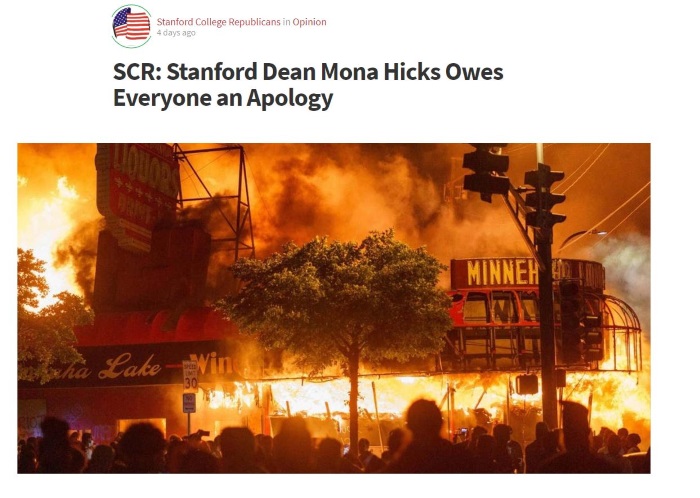 He added that “by endorsing those who employ violent tactics for political purposes, ivory tower leftists like Mona Hicks enable the culture of violence that thousands of Americans are now paying the price for in the streets.”

Although Hicks made a private apology to some Stanford donors, Sills called it “grossly insufficient,” concluding by demanding a public apology from Hicks to the entire student body.

The Stanford Daily’s editors offered more specific comments as to why the piece was not published in a set of emails between editors and Sills obtained by The College Fix.

“Printing a diversity of opinions,” they said, “is distinct from giving credence to language that has been used to undermine the credibility and humanity of Black people.”

The Daily’s opinion editors, Adrian Liu and Claire Dinshaw, took issue with Sills’ claim that “looters and Antifa insurrectionists terrorize Americans.” They told Sills that “there is scant evidence that Antifa protesters are a significant presence in the current protests.”

Liu and Dinshaw also objected to the way Sills framed the piece. They said he neglected to include “the important context that the vast majority of the protests are peaceful.”

“This language implies that the terror and looting is a central element of the unrest, which is untrue.”

The duo advised Sills to make some of his rhetoric milder. One suggestion they made was to mimic Attorney General Bill Barr’s assertion that rioters are “hijacking peaceful protests to victimize Americans.”

Also objectionable was the use of the word “thug” in an earlier draft of the piece.

In a final email wherein Liu and Dinshaw officially refused to publish the piece, the two objected to “the characterization of Shakur and the use of racially coded language in reference to the protestors.”

They directed Sills to a letter from the editors which guides them in their coverage of the current protests. In the letter, the editors wrote that they “recognize the power of journalism and our ability to use our platform to uplift Black voices and narratives.”

After Sills had his piece published in The Stanford Review, The Daily’s opinion editors collaborated on a letter that explained publicly their refusal. Liu and Dinshaw repeated the concerns which they had expressed privately to Sills.

This time, however, they elevated their condemnatory language.

“[W]e will not platform anti-Blackness. We will not publish racism,” they wrote.

The Stanford College Republicans published a Facebook post calling the refusal “shameful” and “yet another example of the lying media shielding violent actors and instigators, like Mona Hicks, from criticism and exposure.”

They also attacked the Stanford Daily’s journalistic credibility, adding that it is part of a media which “aids and abets violent actors on the left through its dishonesty and its attempts to hide information from the public by omission.”

The Stanford Daily is no stranger to publishing pieces attacking conservatives. In late 2019, one contributor deemed the Stanford College Republicans, along with conservative commentator Ben Shapiro, “intellectual frauds” who are “unworthy of our attention.”