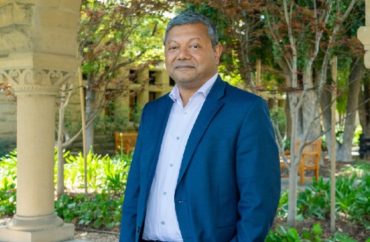 The new school opens in the fall semester.

The Doerr School will “build fundamental knowledge of the Earth and its systems” and “accelerate the development of solutions to the climate crisis at the scale that is needed,” according to the initial announcement. It will also “educate tomorrow’s problem solvers and change makers in this urgent area.”

However, some have taken to the pages of the campus newspaper to criticize the university for not explicitly forbidding funds from oil and gas companies. The school’s first dean, Arun Majumdar, told the New York Times that he would not reject funds from oil companies.

“Not all oil and gas industries are on board, but there are some who are who are under pressure to diversify, otherwise they will not survive,” he said, according to the Times. “Those that want to diversify and be part of the solutions, and they want to engage with us, we are open to that.”

On May 25, the dean (pictured) wrote that he wanted “to clarify that the School does not have plans to seek funding from oil and gas companies for its general operations.”

A doctoral candidate at Stanford opposed the potential oil and gas money and compared such companies to “mutineers.” The new dean’s May 25 statement did not placate his concerns.

“This openness to fossil fuel funding is not hypothetical: the Doerr School is currently slated to absorb numerous fossil fuel-funded programs currently housed in the Stanford School of Earth,” Thomas Hersbach wrote in The Stanford Daily on June 2. “Such funding poses serious reputational risks to Stanford and the Doerr School, which might have its name used to promote climate denial, greenwashing and policies that delay climate action.”

He was not convinced by the dean’s argument that the fight against climate change required an “all hands on deck” collaboration.

“Although this approach might appear reasonable, it would be prudent to verify whether fossil fuel companies are indeed honest deckhands or, instead, mutineers,” he wrote. His opinion piece continued to discuss the ways he believed fossil fuel companies had manipulated or covered up data on harms to the environment.

The Fix reached out to Dean Majumdar twice via email in the past two weeks to ask what the goals of the School of Sustainability are and if he has responded to any of the criticisms, but received no response.

The Fix reached out to Hersbach twice via email in the past two weeks to ask why he believed the funding would harm the school’s reputation and if he was aware of any petitions on the matter.

Four graduate students in different environmental and energy related programs at Stanford, wrote a June 22 opinion piece that explained why the university should reinvest the $1.69 billion raised for the new school toward “environmental justice” instead.

The writers do not believe that Majumdar will fulfill his promise on sustaining environmental justice within the school, which is why the funds should be reinvested there.

“We urge Dean Majumdar to reinvest in environmental justice as the foundation for true sustainability,” they wrote in the campus newspaper. “Indeed, the Doerr School launch presents a unique opportunity to learn from Stanford’s mistakes, create meaningful space for EJ and move us towards a just transition beyond fossil fuels. Can the Doerr School of Sustainability commit to visionary investments beyond big oil?”

The Fix reached out twice via email in the past two weeks to Karli Moore and Celina Scott-Buechler, two of the four writers in the June 22 opinion piece. The College Fix asked if the dean had expressed any support towards reinvesting the fossil fuel funds into environmental justice, but received no response.

“I think it is a slap in the face to our partners, the oil and gas companies who work with our students and hire our students, to say we want to take all the money we have in you and take it out,” Purdue University chemical engineering professor Julie Liu said in April.

Some of her colleagues wanted the Big Ten university to divest from fossil fuel companies, according to WVPE, an Indiana news station.

Liu declined to comment to The Fix when asked about the Stanford situation.

MORE: Climate change is ‘white colonization’ of the atmosphere: professor