Stanford University has “strongly” denounced a Facebook ad which had “targeted” a professor who associates opposition to face masks with “whiteness.”

The now-deleted ad (below), paid for by the David Horowitz Freedom Center under the account “Most Racist Colleges and Universities,” was titled “STANFORD <3’s Racist professors!” and highlighted Professor Hakeem Jefferson of the political science department.

“Jefferson has taken [critical race theory] to heart, promoting his view in a series of social media posts that ‘Whiteness’ is largely responsible for opposition to school mask mandates,” the ad read.

In mid-August Jefferson tweeted that whites’ resistance to face masks was “crazy,” and could not be “disconnected from whiteness.” He added: “It’s like my reaction to jan6 [sic]. You don’t have to be an expert in identity to know that whiteness is driving the behavior.” 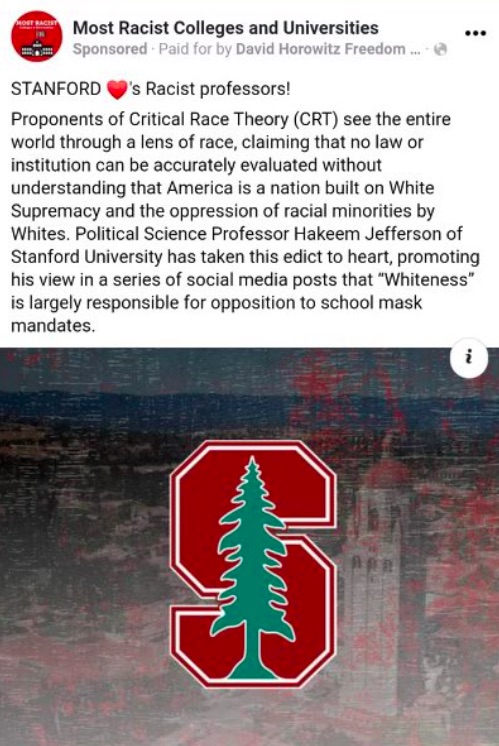 Ain’t like masks are comfortable for non-white people. But you don’t see a bunch of Black folks storming meetings. And it’s not just cause these white folks are GOP. It’s cause they’re white, & believe whiteness confers upon them a kind of power that places them above gov action.

Facebook removed the Horowitz ad after “multiple requests” by the university, The Stanford Daily reports. The “Most Racist Colleges and Universities” page in fact is run by the Horowitz Center, according to the “Page Transparency” note on the account. Previously, the account was titled “Jew Hatred on Campus” and “Stop the Jihad on Campus.” 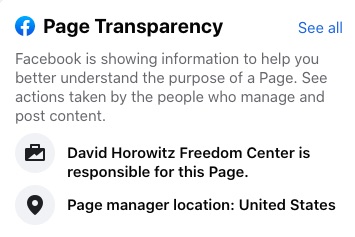 The Daily makes certain to note the Horowitz Center has been denounced as a “hate organization” by the Southern Poverty Law Center (which is merely “a non-profit legal advocacy group,” according to The Daily).

In a statement, Stanford President Marc Tessier-Lavigne and School of Humanities and Sciences Dean Debra Satz condemned the Facebook ad, saying “we deplore social media mechanisms that have the intent or effect of intimidating or silencing scholars.”

Jefferson wasn’t exactly thrilled with that response, saying it was “not as bold or courageous a statement as [he] would have written.”

Jefferson said he was disappointed Tessier-Lavigne took several days to release a public statement condemning the advertisement and affirming his credibility as a lecturer. During those days, other professors took to Twitter to express similar frustration toward the University’s delayed public response.

“As a Stanford faculty member, I also stand with our colleague, Hakeem Jefferson, and urge Stanford to support his research, his academic freedom and his right to safely express his views without being racially attacked,” computer science professor James Landay wrote in a tweet.

Last week, Jefferson said of the matter “This shit is dangerous […] This is targeted harassment intended to scare me into silence. Absolutely crazy shit.”

He added: “Recently, there was a big shattering of glass at my condo building as I walked inside. Sounded like an explosion or a gunshot. For a sec, as I heard the sound, I wondered if some crazy person had tracked me down somehow. That’s a thought no academic should ever have to have.”