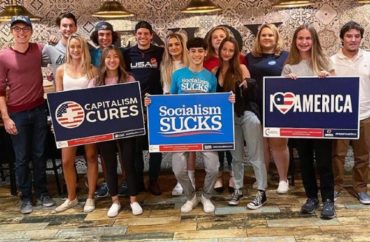 A high school student in Texas is ready to start the new year with his new Turning Point USA group after successfully pushing through approval.

A.J. Ares first attempted to start the group in August at Llano High School in Texas, but only received official approval in mid-November after facing several hurdles. The obstacles included faculty advisors dropping out and an initial denial by his high school. 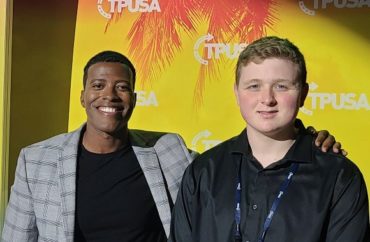 The student activist (pictured standing next to TPUSA staffer Rob Smith) told The College Fix via email that when he asked for approval back in August, Principal Scott Patrick rejected the request.

“The chapter was initially denied because the principal believed that the political group would cause an issue to other students’ education,” Ares said. He provided documents about a grievance proceeding with the school to back up his claim, though these documents do not specifically mention the concerns raised by Ares.

The documents do confirm that the principal originally denied approval of the group.

The Fix reached out to Patrick via email twice on December 13 and 17 and asked for his view of the situation and how long it took to get the group approved. Patrick did not respond to the emailed requests for comment.

In early December, Patrick told Ares’ mother that he had sent out an email to help A.J. find a faculty monitor.

“I have put out a campus wide email advertising the need for a club monitor. I would encourage AJ to speak to some teachers as well to let them know the specifics of what would be required of them,” Patrick wrote, according to an email shared with The Fix by Ares.

The new club approval allows him to start 2021 on strong footing.

In the spring semester my three goals are as follows: 1) To build a regular attendance 2) build strong ties to outside local conservative clubs 3) set up events that will both help the community and gain recognition.

The first official meeting of the newly formed TPUSA group will take place on January 13.

The 16-year-old high school junior told The Fix that national and local groups supported him throughout the process.

“TPUSA helped by giving me advice to gain community support and work through the grievance process,” he said. “My TPUSA [representative] Maycee Croft helped by speaking at the Llano Tea Party and the Highland Lakes Women’s Republican Club.”

Liberty Counsel “gave legal advice and sent legal information such as a students’ bill of rights and case law to the principal,” Ares said. “The members of Llano Tea Party and Highland Lakes Women’s Republican Club contacted the Principal and the school board members to explain their position on the creation of the club.”

The local community of Llano also called and sent many emails to the administration, claiming that preventing the club’s formation was a violation of students’ rights and freedom of speech, Ares said.

Ares also said he collected signed support from 20 percent of the student population after facing some initial hurdles.

Charlie Kirk, the founder of Turning Point, praised Ares in a statement sent to The Fix through a media representative.

“A.J. is a great example of what it means to fight back and defend our God-given and constitutional rights,” Kirk said.

About the Author
Lela Gallery
Lela Gallery is a student at Mount Holyoke College majoring in Philosophy and Politics. She is also a Massachusetts Correspondent for Campus Reform, a contributor to Lone Conservative, and a member of the College Republicans. When she isn’t studying, Lela can be caught catching up on the news, listening to true and horror podcasts, reading about politics or trying out different local coffee shops.