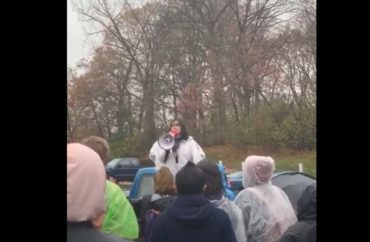 Said it is not living up to Biblical mission

Students at the University of Northwestern-St. Paul recently held a rally that included criticisms of the Christian university’s approach to racial issues.

At a rally with a few dozen people in early November, student Isabel Lopez, who minors in social justice, gave a speech, saying that the private university is systemically racist and thrives off of white supremacy. Students demanded racial bias trainings for faculty, a scholarship in honor of Breonna Taylor and a new course on race and ethnicity in America, according to a list of demands circulated on social media.

The College Fix obtained video of the rally.

Lopez said the institution had “failed to recognize sin is not just manifested through an individualistic level through your relationship with Jesus, but through a systematic level…that sin is used to oppress and silence others.”

She said the school, which she says claims to be different from secular schools, is using a “power dynamic” to implement a secular way of living.

“Your unity is conformity,” Lopez said when referring to the university’s proposed unity prayer. “Your unity is for me to abide by what you say, your Christianity and your Western way of thinking,” the student activist said. “We will not be in a false unity with you. How dare you even think there is unity without diversity.”

Throughout her speech, Lopez made several claims of the university dehumanizing both her and her fellow classmates, specifically those who are people of color.

She said that when she first walked into a classroom at the Christian university the faculty did not see her as a human, but rather, just as a Latina. She also said the university prioritized white students who are enrolled over the students of color.

However, the university denies these claims, as students attending Northwestern Saint Paul are not given priority on the basis of race or for any other reason.

“University of Northwestern does not value any student in favor of another,” university spokesperson Greg Johnson told The Fix in an email. “As noted in our Declaration of Christian Community, we strive to love God and each other as He loves us with kindness, mercy, faithfulness, gentleness, grace, patience and perseverance.”

“We pledge to set ourselves apart as a community of believers for the glory of God,” the school’s Declaration of Christian Community states. “We will hold ourselves accountable to each other, so that, with the sustaining support of the Holy Spirit, we will stand together against the dangers of our fallen world and our own sinful impulses.”

“As an academic institution, University of Northwestern supports the right to free speech, including the right for our students to express concerns,” Johnson told The Fix. “We remain committed to listening and dialoguing with our students, employees, and alumni as we, members of a Christ-centered community, strive to love God and each other.”

As for Lopez, she had also claimed that William Bell Riley, the founder of the Northwestern Bible and Missionary Training School, was a fascist sympathizer and an anti-Semite. The training school is the predecessor to the university. The school spokesperson did not respond to a Fix question about Riley’s history.

Riley did oppose the teaching of evolution and did accuse its supporters of spreading an “international Jewish-Bolshevik-Darwinist conspiracy,” according to a blog post by historian Doug Linder. Riley also praised Hitler for pushing back against evolution supporters in Nazi Germany.

Lopez noted that the school does not have a diversity and inclusion office and pointed to this as an example of university officials prioritizing profits over students and not caring about the experiences of students of color. (It has a Multicultural Services office).

She said the university’s claims that it wants to understand their students is just a false front and administrators actually have no interest in knowing and hearing from its student body.