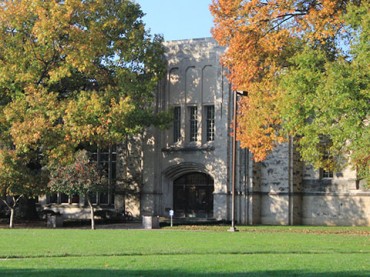 Butler University’s award-winning student newspaper is reeling after an internal dispute over its editor-in-chief’s reporting methods, and a public relations employee’s possible role in her resignation.

Just a day after the employee, who serves as the public editor of The Collegian, criticized the newspaper staff’s decision not to accept the resignation of Marais Jacon-Duffy, the embattled editor-in-chief resigned a second time.

It’s the second blow to The Collegian in a year: The previous editor-in-chief said the paper was swimming in “red ink” because the school cut its funding during a plunge in advertising revenue.

As recounted by Marc Allan, the public editor and Butler’s associate director of public relations, in a Nov. 11 column, faculty senate chair Elizabeth Mix emailed him to complain about Jacon-Duffy’s recent interview.

Mix said that Jacon-Duffy was interviewing her when Mix remarked that she wasn’t using a recorder.

“She then said that she was (pulled it out from under the table) and said she ‘likes to be sneaky about it,’” Mix wrote in the email, according to Allan. “Am I crazy or is this a serious breach of journalistic integrity? She never asked me if it was OK she was recording me, and, had I not asked, she never would have told me.”

After conversations among higher-ups in the university, Collegian adviser Loni McKown told Jacon-Duffy that she should resign to “protect the reputation and credibility of The Collegian,” in Allan’s words.

Jacon-Duffy wrote in a Nov. 11 editorial she was “stunned” when McKown told her the next day to “resign as editor in chief or be removed from my position.”

Mix hadn’t shown any concern about the recorder or Jacon-Duffy’s “attempt at a joke,” the editor-in-chief wrote. “I was surprised my intention to accurately record an interview was misconstrued as deceptive or malicious in nature,” Jacon-Duffy wrote. “Writing notes while interviewing always leaves room for error, so recording the interview is a common practice that provides security and an extra way to check accuracy.”

At a staff meeting where Jacon-Duffy said she was resigning under an “ultimatum,” McKown told the staff they could vote to overturn her resignation, an option the adviser “forgot to mention” earlier, Jacon-Duffy wrote.

When the staff voted to overturn the resignation, McKown said she “was hoping this would happen,” according to Jacon-Duffy.

Allan excoriated the staff vote the next day, in his Nov. 11 column.

“Once a journalist’s integrity is in doubt, he or she is effectively finished as a journalist,” Allan wrote. “That is why the staff should have accepted her resignation.”

The young journalist “made a student mistake, then compounded it with an unfortunate attempt at a joke. For the long-term good of the paper, though, the staff should have accepted her resignation,” Allan said.

McKown, Mix and Allan did not return requests for comment from The College Fix.

It’s not clear whether Jacon-Duffy simply forgot to ask Mix for permission to record or whether she intentionally hid the recorder.

According to the Society of Professional Journalists’ Code of Ethics, journalists should “[a]void undercover or other surreptitious methods of gathering information unless traditional, open methods will not yield information vital to the public.”

The society did not return a request for comment on whether Jacon-Duffy’s action breached its code.

Jacon-Duffy declined to comment, telling The Fix in an email that she’s “trying to focus on graduating and moving on.” Though Jacon-Duffy said several editors were surprised at her initial decision to resign, none returned requests for comment.

‘Technically independent,’ but not really

On Nov. 12, the day after Allan’s column ran, Jacon-Duffy resigned again and the staff accepted the resignation.

Allan wrote in his Nov. 18 column that was he “confident the paper will be back stronger, and hopefully with a staff that is wiser about the importance of conducting itself ethically at all times.”

Though The Collegian is “technically independent … everyone is interconnected,” Allan said he told a confused Collegian staffer.

“You can be as independent as you want, but you do have to answer to others,” Allan wrote. “The paper has space in a university building and depends on some university funding. … Eventually, independent or not, you answer to many people.”

Allan said that Nancy Whitmore, chair of the journalism school, and McKown told staff that they must consider the reputation of a newspaper “that has won three national first-place awards in the last three years for excellent journalism.”

The Collegian has butted heads with the faculty senate previously.

According to the college media blog College Media Matters, in 2011 the faculty senate approved “the option of holding future closed-door meetings, in part to keep The Butler Collegian from reporting on them.”

The paper criticized the vote as “a blow to transparency that possibly could remove important faculty and student interaction.”