The latest example of college students’ hyper-vigilance for anything remotely “racist” comes from Wake Forest University where complaints were made about a person’s cowboy outfit.

A photo of an “unidentified male” donned in what appeared to be a “noose” at a campus Subway was uploaded to Snapchat where subsequent screenshots caused a furor around campus. The caption on the photo reads “Lmao whoever this dude is or if I find out who are ! I will strangle you with that f**king noose you piece of sh*t!! People at Wake bro, y’all playing with life fr.”

The Old Gold & Black reports someone ended up filing a Bias Incident Report (BIR). According to Chief Diversity Officer José Villalba, the “official” Bias Incident group concluded the person in the pic was “impersonating a cowboy by wearing a Western-style shirt with part of an American flag on it and a lasso across his chest and shoulder.”

Nevertheless, Student Senators Miles Middleton and Fadi Narouz “understood” the lasso to be a noose, and at a February 12 Student Government General Assembly meeting decided to bring up the issue as well as other matters of a racial nature — like “Caucasian students behaving rudely to employees of color” and “students of color being scared to enter certain spaces on campus.” 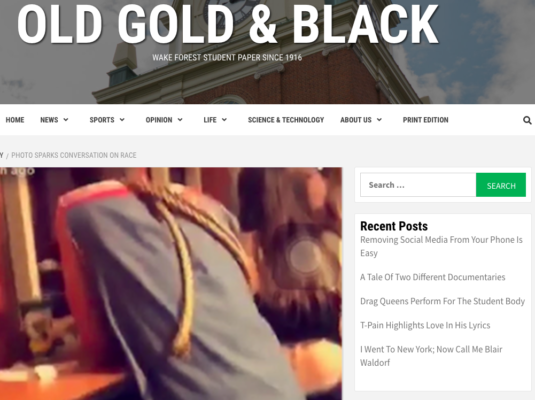 Middleton conceded that if the Bias Incident group said the lasso wasn’t a noose that he would “take them on their word.” However, he said he had his “own set of opinions about how the campus should be dealing with these types of things in a deeper manner.”

While the Old Gold & Black was able to confirm the conclusion of the BIR group’s review process, the content used to reach that decision was not made available.

Middleton commented that the private nature of the BIR system perpetuates an unproductive dialogue about race relations on campus.

“I will say that when there is photographic evidence for something, and students are curious about what that particular item is, there has to be some type of email that goes to students to let them know we are investigating this,” said Middleton. “So, while it might not be a noose to the administration, students are still going to question whether it was a noose because they don’t know that this investigation was going on and that they concluded their point on that basis [or] how. I just need to know how. That’s why I’m a little frustrated by how things were conducted, and I don’t like the secretive nature of how they conduct the [BIR review process].”

Narouz also commented on both the nature of discourse relating to race issues on campus and the productivity of the BIR in facilitating this dialogue.

“Every time it’s the same thing: [a race-related incident] is condemned, it’s shamed, it’s shunned and literally after everyone leaves, it’s back to the same old routine,” Narouz said. “Nothing changes, you know? And the fact that the Bias Report says, oh you know, ‘this wasn’t [a noose],’ like there’s no way of us knowing why, and that’s how it is. It sort of just puts you back in your place, like you can’t do much about anything wrong that happens here.”

Villalba said that although the matter is settled, the BIR group will remain “engage[d] with all of the students involved with the hopes of clarifying the experiences of each individual and providing ongoing support to them.”

MORE: ‘Noose’ that turns out to be lost shoelace causes uproar at Michigan St.

MORE: ‘Noose’ delusion rocks on at the University of Delaware