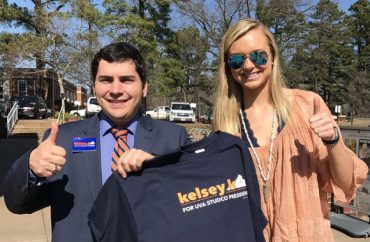 ‘The radical left has no ideas,’ so they name-call

The losing candidate in Thursday’s election for University of Virginia Student Council president is blaming an anonymous flyer that identified her as a Donald Trump supporter.

Posted around campus earlier this week by a group identifying itself as “Concerned Students at UVA,” the flyer said Kelsey Kilgore’s political views “directly threaten progress” among minority students and administrators at UVA.

According to The Cavalier Daily, she was drubbed in the vote, drawing only 17.5 percent to Sarah Kenny’s 82.5 percent.

After the results were announced, Kilgore told The College Fix the flyer “did affect the election,” given that she did not advertise herself as a Trump supporter.

She blamed the university and elections board for not bothering to “determine who printed and distributed this attack flyer” and instead spending “their entire time monitoring my campaign” for violations.

“Being labeled a ‘racist’ was the most hurtful,” she said in an email. “It’s apparent that when the radical left has no ideas, they resort [to] leveling these baseless charges.”

She doesn’t care about ‘students endangered by the Trump presidency’

While the anonymous flyer didn’t literally call her a “racist,” it said Kilgore’s candidacy was “detrimental to the interests of minority students.”

It said she “has expressed her unapologetic support for President Donald Trump, as well as for ‘alt-right’ provocateur Tomi Lahren.” A rising star on Glenn Beck’s network The Blaze, Lahren has called the alt-right “disgusting.”

The flyer accused Kilgore of being “deafeningly and disturbingly silent on the status of students endangered by the Trump presidency,” including students of color, Muslims and undocumented students. “The well-being of your fellow students are at stake” if students don’t vote against Kilgore, it read.

The flyer also made class-warfare arguments against Kilgore, accusing her of spending money on “yard signs and shirts” and free food for students in a vote-buying scheme.

It implied she was preventing lower-income students from participating in student government because they can’t “take time off work to campaign” or afford an expensive “lawn room,” which costs thousands more than a regular dorm room.

Voting for Kilgore “will only reaffirm the disturbing trend of wealth buying success at this university … our values are not for sale,” the flyer read.

Kilgore told The Fix that while she voted for Trump, she wasn’t particularly politically outspoken during the campaign and never met the candidate. Her father did serve in a “leadership role” on the Trump campaign.

She never attended any political rally and had only “some involvement with the [College Republicans] prior to this student election,” but after her campaign experience, she is “looking forward to becoming more involved.”

Kilgore doesn’t know who is behind Concerned Students at UVA, and said the group “had no idea who I was or what I believed.” Its implied accusations of racism were “hurtful,” and in any case, the Student Council should not involve itself in “partisan issues.”

The campus chapter of the College Republicans shared a photo of the flyer to denounce it.

“Truly unbelievable that we’ve reached a point where private support for the President of the United States is somehow made out to be a disqualifying view in a student election,” the group wrote. (According to the Daily, the group “rescinded” its endorsement of candidate Trump.)

Tanner Hirschfeld, a member of the club who is running for chair next month, agreed the flyer and “hate” toward Kilgore played a “deciding role in the outcome of this election.”

It successfully tied Kilgore to Trump’s “most divisive rhetoric” and played off “the current resentment” toward the president among the UVA student body, he told The Fix.

Great campaigning with Kelsey Kilgore, who is running for @UVaStudCo President. To all my friends on Grounds, vote #KelseyKforUVA! pic.twitter.com/cNcosMxkp3

Kilgore faced an uphill battle in campus media as well.

The Daily editorial board endorsed her opponent, calling Kilgore “unqualified” because “she has not directly interacted with student government affairs,” though it didn’t mention Kilgore’s political preferences.

All these critics “insulted her intelligence, character, appearance, family, and beliefs,” said Hirschfeld:

These groups had no reason to attack Kelsey for she had never been anything but nice to all members of the University community. They painted her in the worst possible light by throwing false and disgusting insults at her [racism and incompetence] and ultimately costing her the election. I’m utterly disgusted by the behavior of my fellow students who claim to promote inclusivity and diversity, but repeatedly suppress and attack anyone they don’t agree [with].

Asked whether the university had attempted to identify who posted the anonymous flyers, spokesman Anthony de Bruyn said in an email it was not “University practice to investigate the identities of individuals engaged in [constitutionally] protected speech.”

He clarified that while the flyers could have been improperly posted, UVA “does not ordinarily go to extraordinary lengths … to ascertain violations of the posting policy,” which is limited to restrictions on where and how flyers can be posted.

They would only be investigated if “the improperly posted material constituted a more serious violation, like a criminal threat for example,” de Bruyn said.

Kilgore said the university had practiced a double standard. “Universities are so quick to protect many … liberal causes and rarely step up to protect the freedom of conservative students to think and say what they believe.”