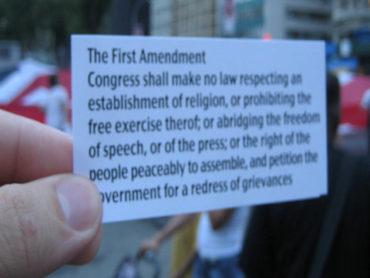 I’ve written several columns here at The College Fix in which I’ve noted how utterly scary the American legal scene would be if students now inculcated with “critical race theory” (CRT) ever got their way.

For example, last November a fan at a University of Wisconsin-Madison football game dressed up as Donald Trump and “pulled” around via noose another fan dressed as Hillary Clinton and Barack Obama. A former UW recruiter then got upset when UW Chancellor Rebecca Blank defended free expression.

That recruiter, Rev. Alex Gee, “cited multiple past incidents in which UW failed to properly condemn hate crimes because of freedom of speech that made people of color feel as if they were not ‘free.’”

Emory University’s Anaïs Hussung over a year ago questioned “the supposed centrality of free speech and intellectual discourse in combatting oppression and bigotry” noting that “[t]oo often, ‘debate’ is merely smokescreen.”

Both of these sentiments epitomize critical race theory’s argument that American fundamental rights are “unequal” due to “existing power structures.”

The Michigan Daily’s Brennan Pope is but the latest to jump on the CRT bandwagon. He takes issue with state efforts to penalize those who disrupt the free speech of others:

“I argue that those with political or capital power tend to reap the benefits of free speech more so than oppressed groups. This is evident when evaluating proposed state legislations punishing students who protest speakers and prominent media figures saying controversial phrases.”

Pope does note the violence which occurred at the campus appearances of Milo Yiannopoulos and Ann Coulter, and wants you to know he is opposed to any sort of physical mayhem.

“On the other hand,” he says, “many protesters were not those who simply disagreed with Milo Yiannopoulos or Coulter’s political stances, but rather felt similarly attacked and unsafe by their messages.”

Yiannopoulos has a history of prejudice, whether it be from his racially-motivated attacks on Leslie Jones, or his denunciation of a transgender student. For these reasons, students often feel threatened by prejudice and bigotry being preached on their own campus. Therefore, I very well could be privileged not to feel compelled to violence, as it could feel like self-defense. Of course, I don’t condone violence, but I have not had to endure the conditions that make violence seem necessary.

Violence has obviously been the catalyst behind these bill, as it not only looks to improve free speech, but also safety. But a byproduct of the bills is restricting the free speech of the ones who feel threatened the most. Ultimately, it protects the powerful speakers who already have political capital and dismisses and punishes the oppressed who stand to lose the most.

Pope also contends the alleged difference in treatment received by Kathy Griffin and Bill Maher following their controversial episodes shows “how the free speech of disenfranchised groups in America are put behind others.” (Griffin’s social judgment was harsher because she’s a woman.)

“There can be arguments over which jokes are tasteful or what form of protest is appropriate, but we shouldn’t punish those already at a disadvantage in society.”

In other words, women and minorities should not be punished (or at least afforded a lot of leeway) for illegal/questionable activities merely because of … who they are.

And this is the main thing which leaves critical race theory wanting: It can never offer, at least in the traditional American legal framework, an answer to just how would it implement justice utilizing the concept of differing societal power structures.

It doesn’t offer an answer because it can’t. CRT requires a transformation of long-standing First Amendment concepts to those more in line with European countries — that is, where hate speech is criminalized. And since the US needs to correct its historical “power imbalance,” hate speech laws would have to pertain only to members of the majority population. Perhaps such wouldn’t be codified, but much like current hate crime laws, it would be the practice.

If there is but one silver lining in the election of Donald Trump, it is that he may be able to ensure that the US Supreme Court will avert such a legal revolution. The recent Matal v. Tam unanimous decision is a very encouraging sign; in this case, the high court ruled that the U.S. Patent and Trademark Office could not prohibit a band called The Slants from registering its name due to its “disparaging” nature.

In the decision, Justice Samuel Alito wrote that “the notion that government can restrict offensive speech ‘strikes at the heart of the First Amendment.’”

“Speech that demeans on the basis of race, ethnicity, gender, religion, age, disability, or any other similar ground is hateful,” he added, “but the proudest boast of our free speech jurisprudence is that we protect the freedom to express ‘the thought that we hate.’”

MORE: Fear the Future: College students’ views on free speech are … rather worrisome