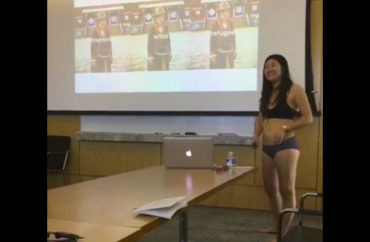 Thank heavens she didn’t do the Full Monty.

A Cornell University student was so offended that her female professor questioned her outfit in preparation for her thesis presentation that she ditched most of the outfit – as did her protesting audience.

Yes, there was a livestream. And yes, the Title IX office is involved.

The Cornell Daily Sun reports that Prof. Rebekah Maggor allegedly asked student Letitia Chai “is that really what you would wear?” when Chai wore jean shorts during “a trial run of her thesis presentation on rehabilitation for displaced people and refugees.”

The syllabus for the public-speaking course explicitly warns students their choice of clothing will be scrutinized:

The work in this course requires the ability to move freely. ​Wear clothes and footwear that are comfortable and will allow you a free range of movement in class. ​For your
performances, dress appropriately for the persona you will present. (For example, how
would you dress for a specific job interview? How would you dress when introducing a
famous speaker at a particular conference? How would you dress to give a speech at a
protest rally?)

Perhaps Chai thought of her presentation as a protest, and decided jean shorts were something she’d wear at a rally.

Maggor allegedly told her the outfit would also detract from “men’s attention” toward her material, and a “male international student” said Chai has a “moral obligation” to wear something more conservative in a presentation, at which “Chai left the room with two students following to comfort her,” according to the Sun.

The professor said she had previously asked a male student to remove a cap during the presentation, but Chai thinks the question toward her reflected sexism.

The student walked back into the theater and did her trial presentation in her bra and underwear.

She invited the public to attend her actual presentation in a sympathy-strip, writing her account of the “denim cut-offs” incident on Facebook:

The first thing the professor asked me was if I was going to tell the administration.

“Why? Are you worried about your career?” I responded.

“What did I do wrong?” she asked. I shouldn’t have to explain to a 40-year-old woman why her comment was problematic — especially because she made it after demanding that I be less submissive. (Yes, I’m Asian. Yes, she’s fucking with the wrong woman.)

“You have to understand that I’m a mother and I worry for my daughter,” the professor explained. “What would your mom think?”

What would my mom think? My mom is a Feminist, Gender, Sexuality Studies professor. She has dedicated her life to the empowerment of people in all gender identities. So, I think my mother would fine with my shorts.

“What are you going to do?” she asked.

“I’m going to give the best damn speech of my life,” I responded. …

The Sun reports that Chai ordered the audience to “strip” when she did her presentation Saturday in bra and underwear, and 28 of the 44 people “slowly started to remove their clothes.”

She said relevant officials pre-approved her underwear presentation, and one of them – a male – “promises to undress a little.” (No word on how the Title IX office feels about a student asking a professor to strip.)

Cornell’s Title IX office reached out to Chai after her publicity, but she said she’s not “actively pursuing a case at present,” according to the Sun. The Title IX office doesn’t need a complainant to investigate Maggor, however.

The professor told the Sun she only asked students “to reflect for themselves and make their own decisions” about their outfits during presentations, and she’s getting support from most of the students who witnessed the kerfuffle.

They said most of them are “students of color” and they don’t want to “discredit [Chai’s] narrative,” but they said Chai misrepresented Maggor’s history and ignored that the professor “apologized on more than one occasion”:

We support Letitia’s commitment to the cause of women’s rights, there is no doubt about that – however, aspects of the Facebook post she made detailing Wednesday’s incident do not align with our collective agreement of how events transpired that day and the intentions behind them. All of us feel that our professor’s words and actions were unfairly represented in the post, with certain quotes taken out of context, and we wish to clarify any misunderstandings that may have occurred.

Their statement gives a fuller account of what happened, saying Maggor asks all students “such questions” in the context of professional attire, and that the professor asked the whole class to share their thoughts after Chai got offended.

Maggor is something of a social justice warrior, as portrayed by the statement:

Throughout the semester, our professor has fostered discussions about how to negotiate the challenges of public speaking as individuals coming from different backgrounds, who may be accustomed to different native languages. We have also had several meaningful dialogues on privilege, discussed how to avoid (white) savior narratives, and engaged in frequent debate on social climate and its effect on public speech. Our professor often encourages all students, but particularly those who are female, to not be apologetic in framing our arguments. She illustrates the ways to us in which society can institute a socialized behavior (for females, acting apologetic for opinions) due to systematic oppression.

MORE: Prof requires students to be naked during final exam