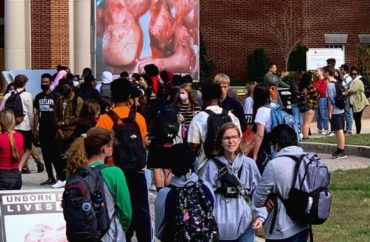 ‘I actually had a leaflet put into the basket of my bike,’ one student senator says

The University of Maryland Student Government Association added an “emergency” item to its Wednesday agenda after a pro-life group set up a display on campus.

The legislation “would see the Student Government Association condemn the demonstrators’ tactics and ask the university administration to describe how enforcement of its policies could improve,” The Diamondback reported. A photo from the display can be seen above.

The SGA emailed The College Fix after the article publication with a link to the resolution. It did not respond to a follow-up question on if the bill passed.

The SGA wants to see more trigger warnings for Created Equal, an outside pro-life group that brings graphic images of abortion to campuses. “I hope that the bill puts in forth stricter regulations for groups who want to come and protest,” one bill sponsor, Jessica Levenson said. “Things like that should have much more trigger warnings.”

Warning signs were placed but they kept falling down, the student paper reported.

Bill co-sponsor Nicholas Marks felt the need to ask the university to intervene after a member of Created Equal allegedly put some information into the basket of his bike.

“I felt like the methods the anti-abortion protestors were using went against the established guidelines the group came into the university with,” Marks told The Diamondback.  “I actually had a leaflet put into the basket of my bike.”

Created Equal set up on campus on Tuesday.

“We’re just here to create dialogue with people about the topic of abortion,” Evangeline Abaffy told the paper.

A sophomore biology major presented Created Equal with an argument that compared dead skin to a new embryo, a distinct human being that contains unique DNA.

Biology major Aidan Appelson “asked a demonstrator if they had showered that morning,” the paper reported, “Because by doing so, the demonstrator had killed the bacteria on him, all of which have unique DNA as well.” Bacteria does not have human DNA.

“There’s a lot of hypocrisy here,” Appelson told the paper.

Other students took issue with the pro-life organization’s comparison to Black Lives Matter. One sign said “Unborn Black Lives Matter,” presumably in reference to the high rate of abortion in the African American community.

Editor’s note: The article has been updated with a copy of the resolution