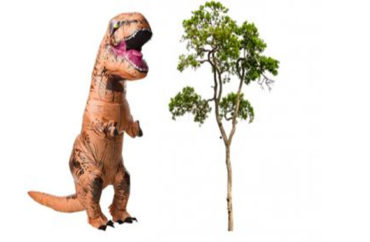 Students involved in an “Extinction Rebellion” protest at the University of California-San Diego last week chained themselves to a tree in order to alert the public to the hazards of climate change.

The Extinction Rebellion, “most prominent” in the UK according to The Guardian (the UCSD student paper, not the far-left UK publication), is an “international movement that uses non-violent civil disobedience to achieve radical change in order to minimise the risk of human extinction and ecological collapse.”

This UCSD event, dubbed simply “Tree,” also featured student organizer Gio Tamacas in a dinosaur suit laying “next to a pool of fake blood” who “growled at students passing by.”

“The dinosaur […] symbolizes our similar fate if we continue our catastrophic trajectory,” Tamacas said. “Business as usual equals human extinction. The dinosaurs didn’t know what was coming. We knew climate disaster was coming — mass starvation, mass migration, and the sixth mass extinction. We have no excuse if we perish.”

[T]hree students tied themselves to a tree in front of the Bookstore during the whole duration of the demonstration, which lasted between 12 p.m. and 1 p.m.

Eleanor Roosevelt College philosophy student Greyson Sims was one of the students chained to the tree. “This is the first among the couple of protests that we want to do to recruit and also to have a presence on campus,” Sims told the Guardian.

One of the group’s goals is to work with the UC Regents to create campus-wide solutions to climate change.

Thurgood Marshall College sophomore Andres Gante, who was also chained to the tree, stressed the importance of making the planet a priority.

“We just want everyone to know that [the Earth] is a first priority,” Gante told the Guardian. “The Earth is the first home we have. It’s what we live on. It’s something that can’t really be ignored for too long. Although we all have a uniform message of ‘yes, we want the Earth to be better,’ you need to do something if you want it to be better.”

The date of the demonstration coincided with the Youth Climate Strike where students the world over skipped classes to “pressure policymakers to address climate change.” The YCS is credited to 16-year-old Swede Greta Thunberg who last year bagged to school to protest global warming at the Swedish Parliament.

MORE: U. Maryland activists ‘won’t take no for an answer’ on climate change