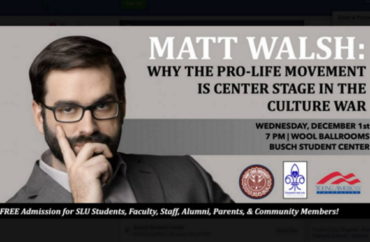 Students at Saint Louis University are signing a petition to have an upcoming Matt Walsh talk on campus canceled, citing safety concerns over “hate speech.”

Walsh, a popular podcast host and conservative writer for the Daily Wire, is scheduled Dec. 1 to give a talk titled “Why the Pro-Life Movement is Center Stage in the Culture War.”

The event is sponsored by the Young America’s Foundation and co-hosted by the College Republicans and Students for Life groups at Saint Louis University, a private Jesuit university in Missouri.

“This is not about politics. This is about safety. We urge you to protect the SLU community by not allowing Matt Walsh to speak on campus,” stated the petition, which has more than 1,600 signatures as of Sunday.

The petition pointed to “extreme statements” on Walsh’s social media accounts that “promote dangerous stereotypes.” One example it provided was Walsh calling gender theory “by far the biggest threat in our schools.”

“The lasting impact of his talk will create further divide in the SLU Community. For women, racial minorities, and the LGBTQIA+ community, his words may instill further fear: fear of participating in a classroom with his supporters, fear of expressing identity at a school that supports these beliefs, and so much more,” the petition stated.

Criticizing university vetting procedures that allowed the talk to be scheduled, the petition called for “closing loopholes that create opportunities for hate speech.”

The opposition to allowing a conservative speaker on campus follows two recent incidents of leftists targeting conservative student groups at SLU as reported by The College Fix.

The first involved the Saint Louis University College Republicans receiving a letter warning that a video of Walsh asking “What is a woman?” may have violated the SLU Student Code of Conduct. During the second incident, two students were caught on film destroying a pro-life display.

SLU College Republicans President Nicholas Baker issued a letter addressed to the SLU community in response to the concerns of students and faculty members over Walsh’s upcoming speech.

“Hearing an opinion that differs from one’s own is not a threat, but an opportunity to understand viewpoints that differ from our own and are representative of the diverse world in which we live,” Baker said in the letter.

Baker disagreed with the claim within the petition that permitting Walsh to speak was “not representative of the Jesuit education we have received in our years at SLU.”

Because Jesuit universities are open to “discussing controversial topics, rather than shying away,” the College Republicans welcomes those willing to listen and discuss the topics at Walsh’s speech, Baker said in the letter.

The college did not respond to inquiry from The College Fix about the backlash over the planned event.

On Nov. 11, Baker had written another letter recognizing that multiple student groups, including the SLU Sluts and Billikens for Reproductive Justice, planned to organize a walk-out protest during Walsh’s speech.

Regarding the possible walk-out, Baker said in the letter that SLU College Republicans are working with YAF and Student Involvement Center Staff to make contingency plans. He added that SLUCR welcomes students with different perspectives to attend the speech and participate in a “peaceful and civil discussion.”

“We encourage those who oppose Matt Walsh’s ideas to come to the event and participate in the Q&A. YAF values robust discussion,” YAF spokeswoman Kara Zupkus told The College Fix in an email on Nov. 23.

The venue for Walsh’s talk was recently changed from the Wool Ballrooms to St. Francis Xavier College Church to accommodate a larger crowd, Baker said in an email on Nov. 26 to The College Fix.

The event is sold out with over 300 tickets reserved. The university was going to require SLUCR to cut the attendee list in half and enforce social distancing, Baker said in the email.

Zupkus also commented on the venue change, stating that the school decided to enforce arbitrary rules such as masking and vaccine passports that “made the event unfeasible to hold in the initial venue.”

“Despite several other prominent speakers being allowed to speak without a mask on campus, SLU’s administrators stated that Matt would have to wear a mask while speaking on stage—more than 6 feet away from any audience member,” Zupkus said in a Nov. 27 email to The College Fix.

Moving the talk to St. Francis Xavier College Church means “the event will fall under the Archdiocese of St. Louis’ much more reasonable COVID guidelines,” Baker said in his email.

Baker also noted that SLUCR is working with Dr. Bryan Sokol, director of the Center for Service and Community Engagement, to “plan for a civil discourse event to take place the following week.”

The College Fix covered a similar incident at Baylor University in 2019, when students at the Christian university started a petition also citing “hate speech” to block Walsh from giving a talk titled “The War on Reality: Why the Left has set out to redefine life, gender and marriage.”