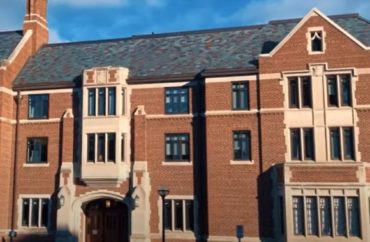 University said it is meeting with the students about their demands

Student activists from a coalition of racial identity groups sent the University of Michigan administration an 18-page list with more than 100 demands.

“We, the Students of Color Liberation Front, unwavering in our commitment to liberate all peoples on campus, call for the University of Michigan to realize our collective demands,” the letter said.

The signers behind the letter include the Black Student Union, the Arab Student Association, La Casa, the United Asian American Organizations and Students Allied for Freedom and Equality.

The petition has over 200 signers, primarily students, as of March 8.

The demands are wide-ranging and include a demand that the school cut ties with Immigration and Customs Enforcement and the Customs and Border Protection.

“Inviting ICE for career recruitment creates an unsafe environment for undocumented students,” the students said. The coalition “demands a written statement from President Schlissel stating that the University of Michigan will not collaborate with ICE and CBP, regardless of circumstance.”

MORE: University of Minnesota student leaders call for campus police to be disarmed

Some of the other demands listed are related to asking the school to provide more support for students of color.

The university said it is reviewing the petition and has been meeting with the coalition.

“The university has been meeting with members of this student coalition to better understand their concerns and those conversations will continue,” university spokesperson Rick Fitzgerald told The College Fix via email.

The Fix reached out to a number of the groups involved, including La Casa, the United Asian American Organizations and Students Allied for Freedom and Equality.

The Fix asked what the groups would do if their demands were not met and if they had a cost estimate for all their demands.

None of the groups responded to the two emailed requests for comment in the past two weeks sent to their group emails. Jeimy Adriana Lopez, a vice president for La Casa’s executive board, did not respond to an email request for comment about the same questions either.

Many of the demands are common of other petitions, such as more money for racial identity programming and more funding for groups. Others include the creation of new departments and learning flexibility during the celebration of lesser-known holidays.

“The University of Michigan must observe Anishinaabek religious ceremonies,” the demands state. “All Native American (South American, Mesoamerican, North American and Caribbean) students must have the right to attend class remotely or complete work asynchronously due to: cultural fasting, sweat lodge, traditional ceremony and/or medicinal harvesting.”

The university should create “a permanent Palestinian Studies Scholar/Chair position under the Center for Middle Eastern & North African Studies,” the activists said.

“Faculty with pan-indigenous ontologies must be hired to present research and course-work centered in decolonial knowledge throughout the University of Michigan’s departments/centers/institutions,” the letter said.

The activists also want support for boycott, divestment and sanctions against Israel.

Furthermore, the public university should “[r]equire classes focused on decolonial pedagogy and epistemology that persist beyond the history of colonialism in Turtle Island (South America, Mesoamerica, North America and The Caribbean).”

The petition also calls for a “police-free campus.”

“The University of Michigan must cut ALL ties with the Ann Arbor Police Department,” the signers said. University officials “must commit to investigating alternatives to police intervention in situations on campus,” the petition said.

“We believe that these demands will improve the experiences of students, faculty, and staff of color, which, in turn, will positively impact the entire campus community,” the activists explained of their list.