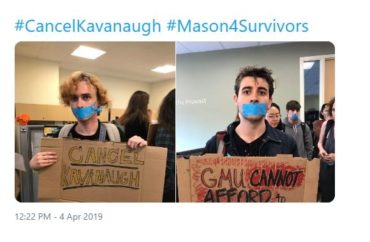 Kavanaugh was hired in January by GMU’s Antonin Scalia Law School and is set to co-teach a class this summer called “Creation of the Constitution” in Runnymede, England, where the Magna Carta was sealed.

Despite the fact that Kavanaugh is teaching over 3,500 miles away from the Virginia campus, several students took to the podium at the Board of Visitors meeting last Wednesday to say they feel unsafe having Kavanaugh teach the class.

Exclusive video recorded by The College Fix shows several students, a few who say they are sexual assault survivors, address the campus leaders to tell them students’ mental health is threatened by the Kavanaugh hire.

“As a survivor of sexual assault this decision has really impacted me negatively,” one female student said. “It is affecting my mental health knowing that an abuser will be part of our faculty.”

A third female student told the board “we are fighting to eradicate sexual violence on this campus. But the hiring of Kavanaugh threatens the mental well being of all survivors on this campus.”

The comments were made during the meeting’s public comment section. The students represent a relatively new group on campus called “Mason 4 Survivors,” launched in recent months.

A student petition created by “Mason 4 Survivors” demands that the university “terminate AND void ALL contracts and affiliation with Brett Kavanaugh at George Mason University.” So far nearly 3,300 have signed it.

After the students spoke, Rector Tom Davis and GMU President Angel Cabrera said they were proud of the students and appreciated that they spoke up and acted as engaged citizens.

The next day, students continued their protest by marching around campus chanting “cancel Kavanaugh” and “take Kavanaugh off campus.” Some had blue tape over their mouths. The group delivered their petition to fire the Supreme Court justice to Merten Hall, an administration building.

The demonstrators also defaced a statue of George Mason, putting blue tape on his mouth and attaching anti-Kavanaugh signs to it, using it as a prop in their protest.

We really out here doing the damn thing. Sharing my story has been so empowering and healing for me, I am so amazed by the support from students, faculty, and community members ❤️ #chacelkavanaughGMU pic.twitter.com/aF0gV0mEZ5

Some pretty powerful speakers spoke out about their experiences and support!#CancelKavanaugh pic.twitter.com/E0QRaK5B18

University spokesman Michael Sandler told The College Fix “we allow students to dress up the statue, so this doesn’t violate any policies that I’m aware of.” He said the university “strongly supports freedom of expression and this would seem to fall into that category.”

As to Kavanaugh’s fate at George Mason University, some members of the Faculty Senate may believe they have the right to investigate Kavanaugh independently despite the U.S. Senate’s determination. They called for as much at their meeting last Wednesday.

But President Cabrera has stated that Justice Kavanaugh’s appointment was approved by the law school faculty in January and he stands behind that decision.

MORE: GMU faculty want new probe of Kavanaugh: ‘there has not been a full investigation’