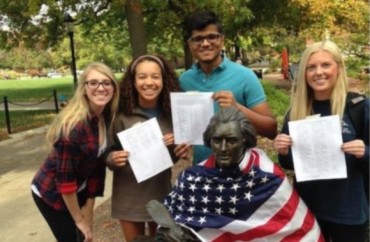 An energetic group of conservative students at the University of Missouri converged around a statue of Thomas Jefferson on Tuesday to defend the sculpture of the Founding Father against a petition that calls for its removal from campus.

The petition claims the statue is offensive, oppressive and celebrates a “racist rapist” – but the conservative students fought back against those allegations, draping a bright American flag over Jefferson’s shoulders and asking peers to sign a petition in his defense, reports Young Americans for Freedom, which conducted the effort with the Mizzou College Republicans.

But the demonstration was all too much for some students on campus who viciously mocked the rally and complained on Twitter about the pro-Thomas Jefferson students. Such tweets included:

#StandWithJefferson is literally the epitome of privilege going unchecked on a college campus. So y’all defending slave owners.. And y’all wonder why there are issues on campus. #StandWithJefferson

#StandWithJefferson is fighting for a slave-owning rapist’s statue instead of fighting for the ACTUAL RIGHTS of ACTUAL PEOPLE on campus???

#StandWithJefferson because white people would rather celebrate a predatory slave owner than admit that #BlackLivesMatter.

#StandWithJefferson is literally the epitome of privilege going unchecked on a college campus.

One tweet even called one of the conservative students who took part in the rally an “Uncle Tom.”

“Recently, the University of Missouri instituted mandatory ‘diversity training,’ after students were confronted on campus by a man who hurled a racial slur. Can we expect the same for those attacking Jasmine with such vitriol?” asked YAF leader Amy Lutz.

But the conservative students were not going to let naysayers ruin their passion, as they collected more than 125 signatures in the span of 45 minutes in support of the statue compared to the opposing petition, which has gained 86 signatures over the span of two months, Lutz added.

Skyler Roundtree, chair of the university’s College Republicans, said in a news release explaining his group’s motives that “we have decided to take a stand with Jefferson, not only in that the recent claims made against him lack truth, but also in that we realize that we are living in a time where our society has begun to sacrifice morals and traditions only to be politically correct.”

And during the rally, student Olivia Kohring tweeted out: “It is amazing the support we’ve gotten after #StandWithJefferson. I am honored to be apart of it! Fight for what is right, not what is loud.”