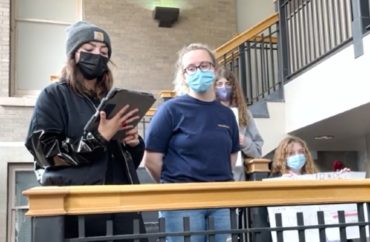 Group says the abortion facility does more than kill babies

A student organization at Syracuse University has released a list of demands to improve prevention and punishment of sexual assault.

Stand with Survivors SU (pictured) has six pages of demands, which include removing accused students from campus living and partnering with abortion giant Planned Parenthood for training.

The president of the organization spoke to The College Fix on a phone interview to share more on the group’s goals.

President Carla Guariglia told The Fix that the current educational modules are not helpful in preventing sexual assault and that the Title IX process as it stands does not help victims.

Her group wants the university to “collaborate with Vera House, Callisto, and Planned Parenthood of Central and Western New York, to implement a required in-depth seminar for all students on consent,” according to the demand list. This will include topics like “anti-rape cultural training,” “sexual and relationship health” and “emergency survivor resources.”

The Fix asked her if this partnership with Planned Parenthood might turn off right-leaning students who are sympathetic to the group’s goals but wary of working with an abortion corporation.

“It is such a minute percentage of the things that Planned Parenthood provide-abortion,” Guariglia said. “As a feminist movement, we are all pro-choice, and we know there is going to be a problem with conservatives. We would also ask that all students take a human sexuality course, but we knew it would be a big hurdle with conservatives.”

She said the group does want to work with Christian and conservative students and understand their concerns, however. “The moment we started talking about Planned Parenthood, we knew that it would get drawback from conservatives and Christians.”

Other demands include additional training and mandatory tests for Greek Life and athletes.

“The passing score on the exam is 100%,” the demands say. “If they fail to do so, they will not be able to participate in practices and games. Additionally, their blackboard and wifi will also be disabled.”

Guariglia explained why the group specifically included Greek life and athletes in their demands.

“Rape culture is thriving in Greek Life,” she said. Guariglia, who is a member of Greek life, said many women in sororities say there is a “heightened rape culture” and that “[s]ome of the men acknowledged that there was a rape culture as well.”

“It is irresponsible to allow people to remain in community spaces if they are accused of the crime,” she said, speaking about the immediate removal from campus of accused students.

She said there is a balance that must be made between protecting people who are victims of sexual assault and protecting due process.

“We are trying to figure out how we can do this without demonizing people who may not be guilty,” Guariglia said.

Many of the demands from SWSSU raise legal liability concerns for Syracuse, if implemented, according to an experienced attorney who regularly sues universities on behalf of students accused of sexual assault.

“Generally, the manifesto directs that anyone accused of virtually anything to be immediately excluded from places on campus and excluded from most campus activities,” Andrew Miltenberg told The College Fix during a phone interview. He said his firm has had “about 30-40 Title IX matters at Syracuse.” The process for adjudication can take “6 to 10 months.”

The exclusion from campus raises due process and fairness issues, Miltenberg said.

“Immediately, upon allegation, you are excluding an accused. That is, a presumption that is profoundly unfair and biased, and a stark departure from essence upon which our judicial system and our founding principles are based,” the attorney told The Fix.

“If you combine the rumor with someone being moved off campus, they are presumed responsible. That is a stain from which it is exceedingly difficult to recover,” he said. He did express support for enforcing no-contact orders between the accused and the accuser.

“Syracuse, similar to many other schools, does not do a good job at enforcing no contact orders and confidentiality. These are two issues that need to be proactively addressed by Syracuse.”

Administration officials should think twice about implementing the demands of the manifesto,the attorney said.

“If Syracuse were to implement policies as written in this manifesto, I would expect that within the next 4-6 months, I would be suing Syracuse,” Miltenberg said.