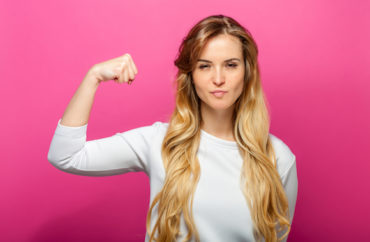 A few female (or, rather, female-identifying) Temple University students are making enough noise about an issue that the student paper felt it worthy of an article: They’re ditching society’s body hair norms.

According to The Temple News, so-called “body hair positivity” has been “gaining momentum” despite the still-growing global hair removal market.

Temple senior Lizy Pierson is one of those adding to that momentum. Pierson says that back in high school she refused to shave her legs “for other people’s happiness.”

“I was on the water polo team and there were a lot of guys … who were like, ‘You’re so disgusting. That’s so gross,’” Pierson said. “My comeback for a lot of guys who say things like this to me is, ‘When was the last time you shaved your legs?’”

Pierson says that at 6′ 1″, shaving takes “a lot of time” and the hair “grows back right away.” She adds “It just seems pointless.”

Pierson claims leg-shaving is a thing only because the razor industry and the media “push the idea that women are more beautiful without body hair.”

Maria Murphy, an adjunct professor in the gender, sexuality and women’s studies program, said being inclusivity in mainstream media is important, but consumers should be skeptical of advertising motives.

“Representation does matter because those materials are what is often immediately accessible to young people in general, but the inclusion of more diverse bodies is often a barometer of what’s acceptable,” Murphy said. “It’s being leveraged under marketing campaigns and basically under capitalism.”

Grace Whittemore, a senior theater major, said there have been times she has not shaved because of convenience.

Although there are “trendy feminists” showing off underarm hair on social media, Whittemore said people need to consider women of different identities might not feel as comfortable making a statement about body hair.

“If you’re going to not shave as a particular feminist statement, then you also need to analyze how people who are more marginalized often have the greater pressure to uphold beauty standards than people who are already more Eurocentric and privileged,” she said.

Murphy added that “rejecting beauty standards that correlate body hair to gender is especially important” in the current era where transgender and non-binary individuals are becoming more visible.

“Denaturalizing bodies from understandings of gender or using bodies as proof as gender is a huge problem,” she said.