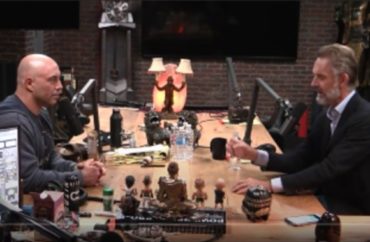 ‘I think that Joe Rogan’s ideology is the biggest threat to critical thinking in the last decade,’ claimed one teacher

A recent article in Mel Magazine warned about students who are getting “red-pilled” online.

One particular claim included a teacher who was worried that her students were starting to listening to popular podcast host Joe Rogan and then *gasp* reading psychology professor Jordan Peterson’s books.

She should be glad her students are listening to Rogan and Peterson.

The article links together flat-earth conspiracy theories with legitimate criticism of the LGBT agenda and Black Lives Matter under the broad umbrella of “alt-right.”

“A few started listening to Joe Rogan’s podcast, which led to them reading Jordan Peterson’s books…I think that Joe Rogan’s ideology is the biggest threat to critical thinking in the last decade,” said Tessa, who is described as a 29-year-old high school teacher for students with learning impairments.

Rogan’s ideology is hardly a threat to critical thinking — in fact it’s the complete opposite.

I started listening to Joe Rogan’s podcast several years ago after a co-worker of mine at a previous job regularly referenced his interviews. This co-worker shared my belief on abortion, but had different views on many other issues. His podcast is the third most popular podcast in the United States and he recently signed a deal with Spotify for over $100 million.

A regular listener of Rogan would hear a wide variety of views on numerous issues, including nutrition, race and political correctness. After all, how many other shows have hosted non-interventionist Congresswoman Tulsi Gabbard, conservative radio host Ben Shapiro, and socialist Senator Bernie Sanders?

Rogan has helped me personally think critically about nutrition and the medical system by hosting proponents of the carnivore diet, a critic of the sugar industry and multiple discussions of how nutrition is often more important than medication.

He admits when he changes his mind on ideas and seems to truly enjoy sharing stories and new information he has learned.

And he has hosted psychology professor and self-help expert Jordan Peterson six times.

Peterson is often the target of people who don’t understand what he talks about, just like Rogan.

A common criticism of Peterson is that he mainly appeals to men.

His popular book 12 Rules for Life: An Antidote for Chaos and numerous lectures available online regularly touch on topics like responsibility, telling the truth and parenting.

At a time when it’s popular to talk about so-called toxic masculinity and at a time when marriage rates are dropping among Millennials and births to unmarried parents are rising, we should want someone who appeals to young men and tells them what they need to do to straighten out their lives.

After all, it’s not like Peterson says anything profound that cannot be found in Christianity, for example.

But if Peterson finds a way to reach people who were not reached before, and helps them take responsibility for their own lives, address problematic family relationships and become a productive member of society then all the better for him and for our society.

Teachers: If your students are listening to Joe Rogan and Jordan Peterson than you should be thankful.

They will probably end up being your most responsible students and the students most open to debate.