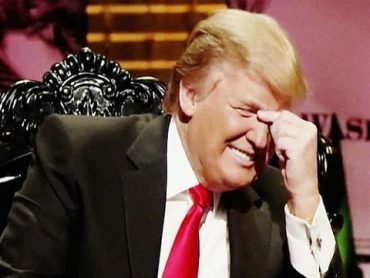 Teachers vent about their jobs all the time, and sometimes they do it on Twitter, Facebook or other social media outlet.

But usually it’s in the vaguest of terms: “Man, what a rough day! Period 5 was off the wall!” … or something similar.

This past Wednesday however, teacher Veronica Welsh took it just … a little bit further.

It was “USA Day” for the school’s spirit week.

As a result, Welsh has been “administratively reassigned” with Superintendent James Grossane offering the following statement:

“Please be advised that we are handling this in a professional manner and all appropriate disciplinary actions are being taken. This is an extremely unfortunate incident and these actions are not promoted by the Smithtown Central School District Administration and Board of Education, nor do they reflect the attitudes of our students and staff.”

It wasn’t the first time Welsh had voiced her views on The Donald, either. Back in May she had written on Facebook “I feel really (expletive) when I see former students posting things on Facebook that are pro-Donald Trump I’m sorry for failing you at Smithtown High School West. I should have done better.”

“Failing you”? You’re a world language teacher, Ms. Welsh. The only course which should be broaching the topic of politics at school is something like history, or government, or civics. And from where would you gather the notion that it is your duty to “educate” students on the “proper” choice of presidential candidate? Was your ed school? Some other class or professor?

MORE: Prof says she must condemn Trump in class, calls ‘balance an offense to the truth’

Down south in Fayetteville, North Carolina, a history teacher is looking at a 10-day suspension without pay for stomping on the American flag in class — in order to “demonstrate” the First Amendment right (based on the US Supreme Court decision Texas v. Johnson) to do just that.

While I can appreciate what the teacher, Lee Francis, wanted to do, common sense does have to be applied. The school is located in a military community, for goodness sake. Francis’ … “example” certainly could have been executed in a different manner.

Francis doesn’t appear to care much about that, though: “I don’t see why being in a military town makes it a good or bad teaching method.

“I have the upmost [sic] respect for our men and women and for the symbols that represent this country. But I also believe we should be teaching the true history and true facts.”

He says he will pursue a lawsuit if his suspension is upheld.

Francis may be overlooking the fact that he could have been charged with a misdemeanor for flag desecration. While the precedent of Texas v. Johnson would probably end up overriding that, it seems to me the school could press the matter by pointing out that Francis didn’t desecrate his own flag — he desecrated the school’s. And without permission!

With all that being said, I would not agree that dismissing these teachers is the right course of action. It just would be nice if they’d agree that what they did wasn’t very bright. (Perhaps Welsh did; the reports do not say. However, Francis remains firm that he did nothing wrong.)

Note too, that these two remain employed, but veteran teacher Theo Olson was forced into retirement for the “infraction” of disagreeing with a Black Lives Matter activist on social media.

What’s worrisome is why, and where, Welsh and Francis got the notion that their antics would be unobjectionable. It’s certainly bad enough that ed schools are largely a joke; worse when you have dealings like this.

In academia there’s a not-quite unspoken assumption that one’s colleagues are all liberal. For example, back in 1994 I had a co-worker who proudly came into my room stating “Here’s your lawn sign for Charlie Oberly!” Oberly, a Democrat, was taking on long-time incumbent (GOP) Senator Bill Roth in that year’s Delaware US Senate election. The co-worker was genuinely shocked when I told her I was voting for Roth.

In another instance, a long-term substitute went on a huge rant about Newt Gingrich during lunch in our teachers’ lounge, obviously assuming all in attendance would be in agreement with him. When I pointed out that not everyone seated were Democrats, like my co-worker from 1994 he was utterly perplexed at how that could possibly be.

Unfortunately, whereas way back my cooperating teacher emphasized never to allow your personal views into the classroom, contemporary educators are instructed to inculcate “social justice.” From a “progressive” perspective, that is.

IMAGE: “Can We Take a Joke” screenshot