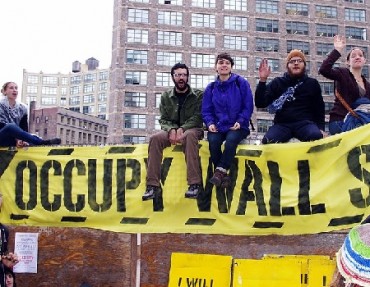 The Occupy Wall Street protest movement has migrated from the streets to the classrooms. Professors at universities all over the country are teaching classes that feature OWS as the subject matter. The College Fix tracked down several of these professors and asked them three questions.

Evans: “Occupy is part of a world-wide critique of global institutions that draws attention to issues that are not addressed by existing institutions such as the WTO, IMF, etc.: social inequalities within and between countries; regional disparities; the overwhelming centralization of power and wealth in the hands of a global elite; the iniquities of debt; etc. . As such, it is part of one of the most important social movements in the world today.”

Evans: “The course does not require anything more than reading the prescribed material, participating in class and submitting exams.”

Evans: “Only as part of a comparison with Occupy. The TP is a localized American phenomenon, and I do not teach in American Studies. The movement does not articulate with the global critiques and movements that are changing how the world views phenomena such as globalization, neo-liberalism and alternatives to existing forms of representative democracy. In this sense, for all the impact that the TP has had on American politics (and its influence is already waning steeply), the movement is somewhat defensive (of existing power structures), anachronistic, (in the digital age, its solutions stem from documents written hundreds of years ago) and distinctively American (in an age when American institutions, including the American constitutions are ceding more space to perspectives and political traditions which are increasingly ascendant in an ever more global world). The TP sheds light on American political culture, from which it arises organically, but it is not a sufficient optic through which global issues (of finance, substantive democracy, global health, etc.) may be profitably analyzed.

In contrast, the relevance of Occupy is precisely that it is an organic offshoot of this global movement.”

Duggan: “My course is not about OWS per se, though it starts with that movement.  The class centers on the issues that OWS has raised, in particular those about the history of debt and finance in the contemporary U.S.”

Duggan: “The students read books, write reviews of them, work in groups to prepare materials for one of the issues that OWS raises, and they take a final exam.”

Duggan: “I have taught courses on conservative and right wing political movements in the U.S. in the past, and would certainly do so again. I am presently at work on a book about Ayn Rand.”

Edwards: “As someone who teaches about social movements, the fact that Occupy Chicago was holding its General Assemblies directly across the street from the building where I teach cried out for building an opportunity for my students to make sense of what was going on.  On top of the proximity, this is a youth-led movement, and my courses typically look at older movements in other times and places, and this would allow students to look at the actions of their peers in the here and now.  Additionally, the American Political Science Association had created a Task Force on Inequality and American Democracy in 2003, which issued a report in 2004 that warned that increasing inequality in the US was undermining democracy.  The Task Force called for more focused research on this topic, and subsequently a lot of great research on the topic had been published.  I had been pondering developing a course around this new research, and since the Occupy Movement had made inequality a central concern of its own, I could integrate that research into the course.  And finally, I decided to teach the course once I made the judgement last fall that this movement would have staying power, and that it had already had an impact in the culture and in our political system.  Indeed, President Obama is now borrowing from the movement’s rhetoric, calling inequality the defining issue of our time, and even the Republican presidential candidates are debating the virtues and excesses of capitalism.”

Edwards: “Everything they do in all my other classes:  reading, writing, discussing. They have read a lot of detailed first-hand accounts of movement participants from around the country; they are about to read from the Political Science research on inequality and U.S. politics; and they will ultimately read social-science research on other movements in order to make comparisons and dig deeper into issues and problems of the Occupy movement by considering how things have played out with other movements in the past. They’ll write a couple of essays based on the assigned readings, and they will each write an independent research paper on a topic of their own choice.”

Edwards: “I have and will teach about the Tea Party phenomenon in the context of my regular social movements course, but don’t see myself teaching a full class on it.  A number of journalists have asked me this question, I am guessing because they want to know if I am promoting a particular cause while ignoring others based on my political preferences/beliefs.  I teach about all kinds of movements: civil rights and the white resistance; feminism and the gay movement, and the Christian Right; immigrant rights and anti-immigration activism; etc. I have never reserved a single course for one movement before–as I note above, there are some very specific circumstances that have led me to teach this course. Furthermore, I disagree with the assumption that the Tea Party is some kind of conservative mirror of, or opponent of, the Occupy movement. The grassroots of the Tea party phenomenon are/were concerned about immigration, welfare, taxes, and the legitimacy of Barack Obama’s Presidency. The Occupy movement began its focus on the political-economic power of Wall Street. I have seen no evidence of sustained discussion within the Occupy movement on any of the issues raised by the Tea Party participants.  I assume that most Occupy activists would disagree with the Tea Party on these issues, but these aren’t the issues they are engaging.”

“While the University was closed during the holidays, a few news outlets reported that Columbia would be offering a new course regarding Occupy Wall Street,” wrote Brian Connolly, Associate Vice President for Public Affairs at Columbia University. “The study of contemporary political, economic and social issues is entirely appropriate and has a long history here. But the fact is that the idea for such a course has yet to be considered by the faculty’s Committee on Instruction and cannot be offered in advance of required approvals. News reports and some departmental postings regarding the spring semester were premature.”