Beginning in the fall of 2019, Temple University will begin the so-called #YouAreWelcomeHere scholarship which, it is hoped,  will increase the number of foreign students at the school.

The scholarship was started in 2016 by Jessica Sandberg, Temple’s director of International Admissions, for which she was honored by The Chronicle of Higher Education as one of 2017’s people “who made a difference.”

According to The Temple News, last year saw a 40-percent decline in international admissions at US colleges as (and note the wording here) “educators […] said the election of Donald Trump and racism are some of their biggest concerns.”

The #YouAreWelcomeHere scholarship will be available to any first-year international student “who submits an essay or video describing how they will help further cross-cultural education.”

“I wanted to forward this idea that we should push back,” Sandberg said about the campaign. “I thought it was the right message at the right time, at a time when a lot of negative things were coming out about the US, to target young people and reinforce the idea of a safe place.” …

“After Trump talked about making it harder for people to come to the U.S., many current students were afraid that they will not be able to continue their degrees,” Alsulaiman, who participates in the campaign, said. “I have witnessed life on Temple’s campus, and I know that international students are welcome here,” he added.

Director Sandberg appears to be pro-“sanctuary city”; earlier this month she retweeted the following from the director of Philadelphia’s Office of Immigrant Affairs: 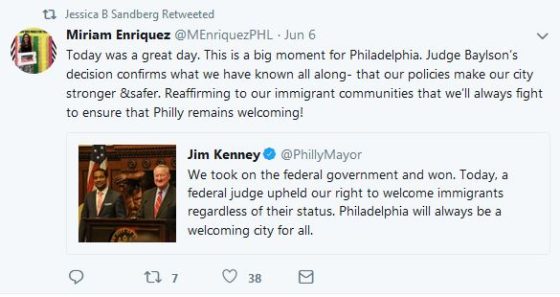 The tweet references Philly mayor Jim Kenney celebrating the court victory which allows the City of Brotherly Love to remain a “sanctuary city.” In fact, Kenney was so jubilant about it that he sang “We’re a sanctuary city … YEAH!” while doing a little jig:

Needless to say, I think @janeslusser and @PhillyMayor are pretty excited about today’s ruling affirming Philadelphia as a Sanctuary City. pic.twitter.com/gdnnjZT9ps