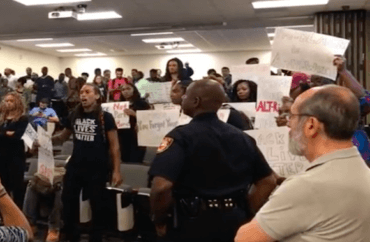 Adding to the growing number of speeches, classes and events besieged by student protesters, a Texas state representative’s speaking engagement at Texas Southern University was interrupted by Black Lives Matter activists and later canceled on Monday.

Rep. Briscoe Cain, a Republican serving Harris County in the state legislature, was scheduled to give a speech at the university’s Thurgood Marshall School of Law, according to promotional material obtained by The College Fix. The event was sponsored by the school’s chapter of the Federalist Society, a conservative and libertarian legal advocacy group.

But the speech was interrupted by protesters who said Cain “shouldn’t have been given a platform because of his stance on transgender rights and actions many have regarded as racist,” according to Houston Public Media.

Video of the event shows students chanting “No hate anywhere! You don’t get a platform here!” Protesters also waved signs reading “Briscoe you forgot your hood,” “Black lives matter” and “You’re not in Deer Park go back home.” (Deer Park is a city located within Cain’s district.)

According to Empower Texans, university official Susan Bynam informed the protesters that “free speech would be allowed, but disrupting the event would not be.”

Shortly thereafter, the president of the university, Austin Lane, and Democrat state Sen. Borris Miles took the stage, with Miles leading Cain out of the room and informing him that the event was canceled “because the Federalist Society did not follow proper protocol in setting up the event.”

In a statement on his Facebook page yesterday afternoon, Cain wrote: “The explanation given by the university [for canceling the event] is blatantly inconsistent with the administration’s approval of the event for months. Black Lives Matter was not protesting the paperwork not being filed properly, they wanted to silence speech they disagreed with, and the University allowed it. It’s disgraceful.”

The College Fix reached out to Cain’s office Monday afternoon but did not receive a response. Calls to Southern Texas University’s media relations department, as well as the office of President Lane, received no response on Monday night.

James Douglas, the interim dean of the Thursgood Marshall School of Law, told The Dallas Morning News that the event cancellation may have constituted a free speech violation.

“We have a process here in the law school, and [the Federalist Society] went through our process,” Douglas said.

Regarding the event, Texas Southern University told The News: “Once campus administrators were made aware by our police department of a disturbance at the law school involving our students, they conducted a check of recognized student organizations, it was determined that the Federalist Society was not a sanctioned University organization and proper scheduling procedures were not followed.”

This is not the first time the school has scuttled an appearance by a Republican. In May of this year, Texas Southern University withdrew an invitation to Texas GOP senator John Cornyn after a Change.org petition claimed Cornyn promoted “discriminatory policies and politicians.”

Recent weeks have seen protesters at several colleges shut down campus speaking events and disrupt campus proceedings. At William & Mary several weeks ago, Black Lives Matter activists stormed a stage where an ACLU representative was speaking; school officials allowed the activists to speak and then quickly canceled the event. Last week, protesters shut down a speech by University of Oregon Michael Schill in what activists called a “stand against fascism.”

At the University of California, Berkeley, meanwhile, activists interrupted a class and demanded that the professor change a scheduled exam to a take-home test.

EDITOR’S NOTE: This article originally stated that Daniel Caldwell did not return a request for comment from The College Fix. Due to a technical error, Caldwell did not actually receive The Fix‘s request for comment until after the article was published. The article has been amended accordingly. Correspondence between Caldwell and The Fix was subsequently reported in this article.