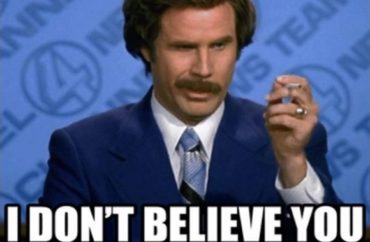 When my son was much younger, I found it necessary to tell him the famous fable of “The Boy Who Cried Wolf.” He was only about 6-years-old at the time, and when I recited the famous tale I really got into it, complete with sound effects and a bit of improv on the story (think ferocious wolf and townspeople begging for their lives and being slaughtered). Apparently I did such a good job that I actually seriously frightened him. Perhaps I went a bit too far.

Today my son is a Marine, so clearly he’s recovered, and we can chuckle at the experience. But I think at the time, I hope at the time, I taught him a serious lesson about the consequences of not just lying, but of losing one’s integrity and ceding one’s right to be trusted and believed.

I was reminded of this recently as The College Fix reported on how some students at Northeastern Illinois University claimed that a campus talk by former White House Press Secretary Sean Spicer was making them fearful. He was invading their “safe space” and his presence represented violence against them, or might prompt it, or something.

Keep in mind, this university is located in Chicago, which sees dozens of gang-related murders each month. And the one MAGA-related attack that did take place there recently was actually by a black guy who hired two other black guys to beat him up.

In other words, I don’t believe these campus “snowflakes” who claim they are scared by Spicer or the alleged violence he might incite. Bottom line: they said it as a tactic to get him disinvited.

And the problem is we’ve seen this ploy used over and over at universities across the nation during the last several years, as students angrily stand up and DEMAND their safe space not be invaded. Far from cowering weaklings, these demonstrators are quite the opposite. They are outspoken, bossy crybullies who lie about being afraid to get what they want.

Did Northeastern Illinois University cancel Spicer’s talk when the students bemoaned their fear? No, no it did not. That’s not to say the tide is turning on disinvitations, or that administrators have stopped treating college students like kindergartners. Too often they still do.

But thankfully I think many in the general public, like the villagers in “The Boy Who Cried Wolf,” are not so quick to fret over the state of these aggrieved students crying “fear” anymore, and instead are done playing games.