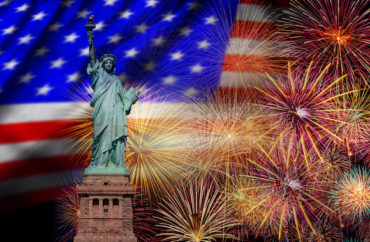 First of all, don’t actually ‘celebrate’ it

If you’re woke, then the Fourth of July can be a very triggering “holiday.” After all, it’s the celebration of the founding of the United States of America—a genocidal, colonialist, imperialist warmongering nation that, to this day, doesn’t even guarantee free health care and free condoms for everyone.

It’s possible that you’re marking this year’s Fourth all alone: Many of you may have chosen to remain on campus over the summer rather than return home to your close-minded, ultra-right-wing fascist families, the ones who drink nonorganic dairy milk and who can’t even be bothered to attend any anti-sweatshop protests throughout the year. If that’s the case, then here is a handy guide for “celebrating” the Fourth on your own:

– Don’t buy fireworks. First of all, they’re probably illegal to set off out front of your dorm building. Second of all, fireworks are quite obviously symbolic tools of violent colonialist imperialism: Only the ultra-privileged among us could possibly find loud, explosive pyrotechnics “fun” rather than terrifying and triggering. If you must celebrate in some sort of fire-based medium, consider symbolically burning your laptop, which was probably made in China using non-union labor. (Be sure to write your parents and ask for another laptop, because you’ll need it once school starts up again.)

– Grill responsibly. Meat is murder. So are most vegetables, which cannot be grown and harvested without killing at least a few groundhogs and numerous pollinators. All is death. If you’re determined to grill out (an obvious callback to patriarchal 1950s white suburban norms, but whatever), be sure to purchase minimally-processed “tofu pups,” meatless alternatives to hotdogs that taste a whopping 5% as good as the real thing (this is an improvement from recent years). Flaxseed and parsley burgers are also an option. Of course, grilling with charcoal does release greenhouse gasses into the air, contributing to colonialist global warming. Consider going to the dining hall instead for a kale-and-quinoa salad, a truly American dinner if ever there was one.

– Do your part to fight the fascist government of America. The Fourth of July is supposed to be all about freedom. But actually it’s really a holiday about freedom for white, straight, cisgendered, able-bodied, upper-class, heterosexist white men. We all know this. Instead of taking part in this patriarchal terrorist celebration, consider making it a holiday about real freedom-fighting. Suggestions: Write several snarky tweets about President Trump (bonus points if you retweet some whip-smart anti-conservative takedowns by Alexandria Ocasio-Cortez). Attend a campus Resistance meeting (make sure it’s chaired by a nonbinary two-spirit pansexual person of nonwhite origins). Stage a protest on the Quad in which you gnash your teeth, wail to the heavens and announce your unearned privilege to the world. Probably nobody will attend it, because they’ll all be off at cookouts and pool parties having what they call “fun.” But you know better. Congratulations.

MORE: The Fourth of July still means something. Don’t forget it