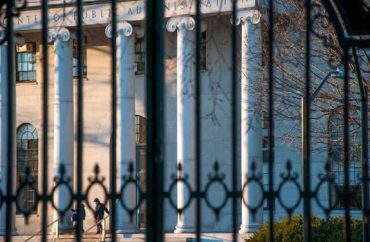 Students protest racism, sexism, and heteronormativity. They should care more that they’re learning to neglect everything else about being human.

Eboo Patel, founder and president of Interfaith America, reflects on campus activism and culture in a May 24 essay in the Chronicle of Higher Education. His instincts about the excesses and myopia of student activism are correct, but his appreciation of colleges as a miniature, model civil society or democracy is profoundly misguided.

Despite their fetish for diversity, colleges deliberately prize a certain set of qualities and identity markers but neglect the mass of humanity that doesn’t meet their stringent standards.

In cultivating a homogenous enclave that differs mainly in color and gender, and teaching them to exaggerate their own race or gender-based oppression, colleges not only fail in promoting diversity, they cultivate an indifference toward neighbors and citizens who are in most need of care.

Patel has reservations about the audacity of student activists, the impracticality of their demands, and their blindness toward their own privilege and the plight of those without the benefit of education.

He describes a “protest” at Sarah Lawrence College, a handful of students interrupting a panel in which Patel was invited to speak alongside academics with distinguished records and diverse, thoughtful perspectives. The narrative is familiar:

But right as that part of the program began, there was a rustle in the balcony and a discernible shift in mood. Sixty students stood up as a collective, raised their fists in the air, and declared that they were taking over the space. One by one, they began reading statements of protest from their smartphones.

Each statement followed the same formula. A typical one went like this: “As a person who benefits from white privilege but is oppressed by heteronormativity, I call out Sarah Lawrence College for further oppressing its already marginalized students and call on President Cristle Collins Judd and the college to immediately agree to all demands issued in our manifesto.

But despite his discomfort at this disruption of academic life, Patel seems cheerful about college as a happy place and incubator of democracy and civic life.

“I have visited something like 150 campuses over the last 10 years, and I can confidently report that most days at most colleges are good days,” he stated. “Most days at Sarah Lawrence are also, I’m sure, good days. The campus has wonderful educators and energetic students.”

Even more, American universities are one of the country’s “great contributions to human civilization,” he wrote.

They “create knowledge, help set the nation’s priorities, and serve as mini civil societies. They are models for diverse democracy.”

College leaders may intend to form their institutions as miniature models of civil society and democracy, but in this they fail utterly.

Institutions of higher education have established offices and phalanxes of administrators dedicated to promoting “diversity, equity, and inclusion.” Harvard’s “Diversity and Access” website, for example, includes a “Black Lives Matter statement” and a message about anti-Asian violence.

“Our students,” according to the website, “bring their perspective on the world—an understanding that is deeply tied to their culture, background, and experiences. The result is a diverse, open-minded community where dialogue and debate are not only encouraged—they’re inevitable.”

But schools like Harvard promote a narrow kind of diversity, roughly corresponding to protected classes under employment discrimination law: race, ethnicity, religion (nominally if not in practice), national origin, gender and sexual orientation.

They simultaneously cultivate a homogenous elite. College students at such universities, the roughly 250 elite residential nonprofit schools in the country, are usually young, cognitively superior, and cultivated by an inherited family, class and educational background. They are disproportionately liberal or progressive.

As Patel notes, they can also expect similar life outcomes, on average, simply because they are attending university.

“Quality-of-life indicators – occupation, income, health, social status, self identity – are quite straightforwardly predicted by level of education,” he said, paraphrasing political scientist Robert Putnam. “These findings include people with any kind of college degree.”

Elite colleges exclude most people who are not bright, young, and able of body and mind. Compare that selection of Americans to the population at large; and you’re seeing a sliver, not a microcosm. Ninety-two percent of college students are under the age of 24. Colleges are conspicuously lacking in children, low-functioning people, the middle-aged and elderly, and pregnant and breastfeeding women, to name just a few examples.

College these days is not a village or democracy; it’s a kind of Eden, an idyll where the youth are given everything, they have dominion over it all, and there is no aging or death.

Arguably this homogeneity is necessary to cultivate the arts, sciences and other pursuits of excellence at a high level. College is for the young because they need a time of experimentation and cultivation to ready themselves for the demands of the rest of life.

Furthermore, the care that people with weaknesses require often may be incompatible with the maximum cultivation of the strong. This is a tragic feature of human life: good things are not always reconcilable; you often need to choose one over the other.

But as a result of the homogenized, buffered environment they inhabit, students may become habituated to peers who don’t usually require much in the way of care. When they do require help — when, for instance, mental illness overcomes an otherwise stable personality — there’s often an office and an army of professionals to intervene.

As a result, students may be trained to overemphasize group or identity needs and demands and neglect the individual, relational care they might owe to a neighbor, family member or friend in need.

But if ultimately some homogeneity on campus is unavoidable, students must learn to understand that their world differs not simply in race and gender, but in convictions and basic capacities. That understanding, properly cultivated, would bring colleges closer to a model of democracy and civil society.

That is one reason why the study of art and history – not as something to deconstruct, but as something from which to learn – is crucial.

College students sealed off from the world may not encounter a political rival, a helpless infant, an ill neighbor or a dying father. But by encountering many kinds of vulnerability in their studies, they can begin to empathize with those who are unlike them, but whom they will almost certainly encounter and may eventually become.

So humanities courses must not emphasize simply differences and encounters involving race and gender. They must expose college students to a fuller spectrum of human experience, much of which is common to all.

If diversity, equity and inclusion mandates result in a better balance of race, ethnicity, and gender, that’s good. But these mandates become insidious when they teach us a partial, and therefore false, understanding of the differences we should strive to respect and accommodate.

Students protest racism, sexism, and heteronormativity. They should care more that they’re learning to neglect everything else about being human.

MORE: A bachelor’s in diversity