The requests are part of a “White Ribbon Against Pornography Week” campaign underway at the prestigious Catholic institution by the campus group Students for Child-Oriented Policy. The anti-porn effort is an annual tradition now in its third year.

“Our goal … is to help students realize how damaging pornography consumption is to your physical and psychological well-being,” group President James Martinson told The College Fix. “With 68 percent of divorces citing pornography usage as a contributing factor, we also want Notre Dame students to understand how the industry affects the lives of those around them as well.” 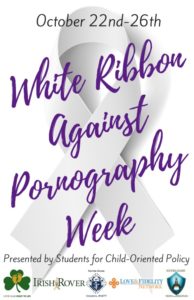 In the face of the massive violation of human dignity perpetuated by pornography production and consumption, many organizations worldwide have taken the simple, positive step of internet filtering. Unfortunately, Notre Dame has yet to take this step. The Notre Dame Internet Compliance Policy prohibits the access of pornographic material, but the University has not enforced this policy.

As a university that champions social justice, human rights, equality and dignity, Notre Dame ought to block pornography using the technology available to us. Doing so represents both an attempt to eradicate pornography from the campus culture and, more broadly, a strong stance against sexual assault, sex trafficking and other human rights violations. We have come to expect our school to be a driving force for cultural change in our nation, and pornography is a cultural issue that needs changing.

“We are still discussing the filter with administration,” Martinson told The Fix. “I am confident that President John Jenkins will do the right thing and agree to make the necessary changes to the Wi-Fi network by the end of the school year.”

A letter to the editor expected to be published tomorrow in the campus newspaper is signed by female students at the school who call for the same action. “Every human person is worthy of the utmost dignity and respect. Pornography use at Notre Dame threatens this respect by preventing men and women from encountering the full personhood of one another in friendships and relationships. How? Pornography propagates a mindset that people, especially women, are mere sex objects,” their letter states in part.

VIDEO: How long does a pro-traditional marriage sign last on Catholic campuses? About 5 minutes.