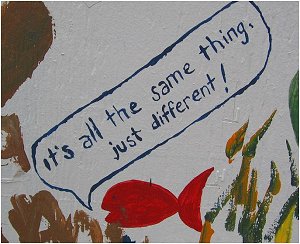 Syracuse University higher-ups “plan to create task forces and seek input from students and faculty to address diversity and inclusion issues” after a campus forum was held a week ago this past Thursday.

Why the need for the forum in the first place?

Well, a SU women’s soccer team player named Hannah Strong was caught on video using a homophobic and racial epithet. That’s right, a single individual who was suspended from the team for what she did, means that an entire college community is in “crisis.”

In the beginning of the forum, Chancellor Kent Syverud briefly addressed the audience. During the forum, Syverud said the issues being discussed were much larger than the Strong video itself.

After Syverud’s introduction, participants discussed two sets of questions and then broke into individual discussion groups, which Syverud participated in. Syverud ended the forum by summarizing what was discussed as well as the next steps moving forward.

Vice Chancellor and Provost Eric Spina and Kantrowitz then addressed several specific demands that student leaders had given the administration. Some of those requests came out of a forum and a rally that were held on Sept. 12 and Sept. 19, respectively.

I love this line: “The issues being discussed were much larger than the Strong video itself.” But of course! They always are. Even if the Strong video had turned out to be a complete hoax, the “issue” would still have been worthy of a campus confab about diversity and inclusion — because, after all, they’re still problems, dammit!

And how will forcing students into discussing their so-called “privilege” be useful and productive? How will additional funding for the African-American Studies department help alleviate the “scourge” of the occasional individual who may utter a hurtful epithet? Elsewhere, at the University of Minnesota, we read “Diversity efforts spur campus-wide discussions.”

Why? Apparently because of folks like president of the African Student Association Nya Lony, whose “comfort is confined” to the campus Black Student Union office. She feels, she says, a “strong sense of community” there … and apparently nowhere else on the campus of approximately 50,000 students:

Lony’s experience as a minority at the University of Minnesota isn’t unique, and it’s an issue school leaders say they would like to address.

As part of an ongoing discussion to increase diversity and inclusion on campus, the University launched its first-ever diversity week on Monday, which lasts until Friday. School officials said the week’s purpose is to celebrate campus diversity initiatives and brainstorm new ways to create a more welcoming environment for University students.

Naturally, the school’s Office for Equity and Diversity led the effort, which included “nearly 50 events ranging from open houses at multicultural offices to special lectures on topics ranging from gender equity to cultural intolerance.”

Minnesota also has that most indispensable of university employees, a Vice President for Equity and Diversity, who added that

the weeklong event fits into the University’s mission of raising awareness about the school hosting all types of cultures and people.

“We’re taking risks by having conversations we usually don’t have.”

Ah yes — the “conversations we usually don’t have.” We know by now what that usually means.

Lastly, there’s Tulane University where the Undergraduate Student Government (USG) recently created a subcommittee “that will focus on inclusivity and equality in both USG and on the Tulane campus”:

Vice President for Student Life Fernando Ramos said he “saw a need for a team of people dedicated to making Tulane’s campus a more inclusive place.”

The new Director of Inclusive Excellence and Equality (there’s a title, eh?) Sarah Spiegelman said “she hopes to use the diversity subcommittee to make Tulane a safer space for all communities,” and added “… [we want] the campus to be an equitable and safe place for all people to be universally accessible in terms of buildings, academics, programming and social life.”

Because … Tulane isn’t already that? Which groups of people don’t have access to a particular academic program? Which group doesn’t feel safe in a certain Tulane building?

What happened in elementary, middle and high school? Weren’t students taught to embrace diversity and be tolerant of other cultures then? Of course they were. Anyone who thinks otherwise is being silly.

Which means there’s another motive at work at campuses. Gosh, what might that be …?