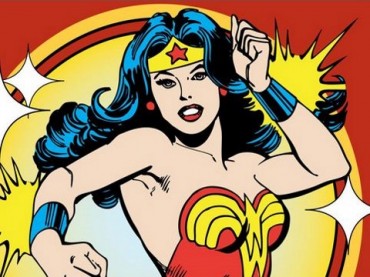 It may come as a surprise to many that when Wonder Woman joined the Justice Society of America, a precursor to the Justice League, it was as its secretary.

That’s just one of many shocking truths about Wonder Woman, who has come under more study and scrutiny recently as Hollywood prepares for her big screen debut in “Batman vs. Superman: Dawn of Justice.”

Several scholarly works have sprung up from renewed interest in Wonder Woman, including ones that deal with her surprising past and her bizarre creator. The average Wonder Woman fan is often shocked to find out the superhero was not always the feminist icon she is viewed as in While she had all the trappings of a feminist icon, the Wonder Woman originally created by William Moulton Marston and artist H.G. Peter in the 1940s was known to be portrayed in a vastly different manner.

In several of her early storylines, Wonder Woman was often characterized as ditzy, going so far as to escape from a sticky situation blindfolded because the tape over her eyes would take her eyelashes with it if removed.

Again, when she joined the Justice Society of America, it was as a secretary of all things.

As the icing on the cake, her powers were rendered useless if her bracelets were tied by a man, an absurd weakness that persisted as late as the 1970s. Most of her nemeses were women, which afforded her an opportunity to appear powerful without upsetting the apple cart.

She also had an affinity for dominating men, and in fact she was at times almost an anti-feminist caricature: her silver bracelets were not just a trendy fashion accessory, but the only thing preventing her from letting loose her full power in a “berserker-like rage.” She’d use her powers to beat up men, and force them to do her bidding after tying them up with her Lasso of Truth.

Her skimpy outfit raised eyebrows from the very beginning; DC Comics editor Dorothy Roubicek even wrote a memo proposing that the costume be altered to resemble a Greek tunic.

More recently, modern researchers have not shied away from addressing the anti-feminist aspects of her character. Dr. Keira Williams, assistant professor at Texas Tech University working on a book project about matriarchies in pop culture, told The College Fix that her project was originally inspired by research about the unusual matriarchal ideas of the superheroine’s creator, the Harvard-educated William Moulton Marston.

“Marston predicted a future matriarchy, a ‘race of Amazons,’ which he explained using his now-discredited psychological theories (he had a Ph.D. in psychology),” Williams said. “The Wonder Woman comic was his feminist Trojan horse, so to speak, to disseminate his theories widely and to reach a younger, nonacademic audience.”

Most of the questionable aspects of Wonder Woman’s origins have been gradually eliminated to make the character more the feminist icon she is today. The character’s evolution can be seen as an indication of what feminism was many decades ago, and how women are viewed differently at different times.

Dr. Jill Lepore, an American History professor at Harvard University, published a book about Wonder Woman and Marston in October titled “The Secret History of Wonder Woman.” Lepore’s work investigates the origin of Wonder Woman’s character, as well as addressing Marston’s biography and what led him to create such a unique character.

According to Lepore, Marston was a Renaissance Man of sorts who was a scientist, lawyer, inventor, filmmaker, novelist and therapist as well as a comic-book writer. He believed that women had exaggerated their submissive instinct, and that bondage was the key to remedying this imbalance.

“The fact that a polyamory enthusiast created [Wonder Woman] partly as a tribute to the reproductive-rights pioneer Margaret Sanger is, somehow, only the fourth or fifth most interesting thing in Ms. Woman’s bizarre background,” wrote New York Magazine in a review of Lepore’s book.

Texas Tech’s Williams said that as she started to analyze the fictional matriarchy in the Wonder Woman comics, she realized that it was depicted quite differently in the 40s when the character was first introduced than today.

She emphasizes that her work is not about feminism, however, even going so far as to describe depictions of her book as being about feminism as misrepresentations.

“Feminism is a sort of theoretical backdrop of the entire manuscript, but this project is more a work of feminist history, because that is the theoretical lens through which I read documents from the past, than it is a work about feminism per se,” she said.

Several of the matriarchies Williams is working on are deliberately anti-feminist, such as the “African matriarchy” at the 1893 Chicago World’s Fair and the criticism of careerist “superwomen” in the 1980s.

While research about Marston originally turned Dr. Williams onto her path of research, Wonder Woman herself is just one small part of the investigation of about a century of American pop culture, she said.

“Wonder Woman’s role as a feminist icon will enter my book in terms of the broader role of feminism in matriarchal theory,” Dr. Williams continues. “Early Wonder Woman came from an all-female, matriarchal society that dominated men, and in fact, domination was a key part of Marston’s pseudo-psychological ideas about matriarchy.”

“As my students in my current Wonder Woman course like to debate, female domination of men is not a part of our current definition of feminism, and in fact, it is a key part of negative (and false) definitions of feminism over time,” she added. “So this explicit, even encouraged, domination of men is a major difference between Marston’s matriarchy and some of the other feminist-produced matriarchies I examine in my research.”