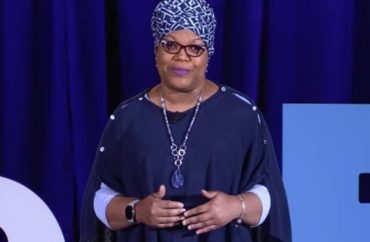 A theology professor has published a rebuttal to those who are troubled by her “Dear God, Please help me to hate White people” prayer.

Chanequa Walker-Barnes, a psychologist and professor of practical theology at Mercer University, contributed to a collection of prayers in “A Rhythm of Prayer: A Collection of Meditations for Renewal.” It was published in February and became a best-seller.

Walker-Barnes’s contribution is titled “Prayer of a Weary Black Woman.”

Later on, the prayer doubles-down on the petition:

My prayer is that you would help me to hate White people — you know, the nice ones. The Fox News-loving, Trump-supporting voters who ‘don’t see color’ but who make thinly veiled racist comments about “those people.”

… Lord, if it be your will, harden my heart. Stop me from striving to see the best in people. Stop me from being hopeful that White people can and do better. Let me imagine them instead as white-hooded robes standing in front of burning crosses.

The professor’s prayer prompted some controversy.

“On Saturday, one of the members of my church sent me these images of a ‘devotional’ she found in Target. This kind of thinking is a direct result of CRT and is completely anti-biblical,” one pastor tweeted.

Another critic called it “woke Christianity.”

My statement on the context behind and attack against “Prayer of a Weary Black Woman.” https://t.co/Q0zCSCbAVA

Responding to the criticism, Walker-Barnes posted the prayer in full and explained it in a blog post:

The “critics” – a word I use lightly since this is not good-faith engagement – are willfully misinterpreting the prayer (and also critical race theory), to an extent that can only be explained by hermeneutical incompetence or willful maliciousness. This is part of a pattern of abusive behavior that is being waged largely against Black women scholars and clergy who do intersectional justice work.

In all truth, my familial and personal experiences of racism have given me thousands, maybe even millions, of reasons to hate White people. It could easily be seen as justified. And I could find biblical precedent for it.

But dammit if God hasn’t given me a different spirit, one that insists on looking for goodness and possibility, one that holds holy rage and holy hope together. Many Black women can connect to that prayer, especially those of us who labor for justice within and beyond the church. Loving people who are committed to hating us – to disenfranchising us, incarcerating us, and abusing us in myriad other ways – is hard. And still, we persist.

The Blaze reports that the professor’s prayer is not her only criticism of whiteness, noting that in a lecture at TheoEd Talks, Walker-Barnes blamed racism on “pathological whiteness.”

MORE: This professor just stood up for white males across the nation. Read his powerful letter.