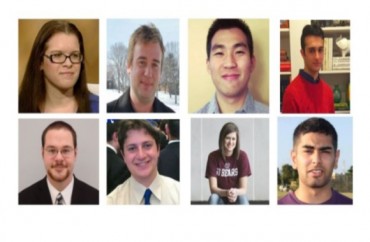 Many college students moan and groan about racism and sexism and homophobia, and demand “safe spaces” – but the truth is they are already in the safest place imaginable, campuses that coddle and champion leftist viewpoints.

Meanwhile, it’s conservative and Republican students who deserve to clamor for “safe spaces.” Whenever such a student dares to open their mouth or take fingers to keyboard to assert their opinions, they are viciously smeared, attacked and harassed by the very peers who demand tolerance, inclusion and diversity.

Take these eight conservative students have been targeted by rude, intolerant and self-righteous campus vigilantes who are so self-absorbed they can only see their own indignation and refuse to live by the very tenets they demand of others.

Bryan, a two-tour veteran of the Iraq war, wrote a column this month critical of the Black Lives Matter movement in his campus newspaper. In response, student activists stole the newspapers with his column, called him racist and other names online and in person, and have pressured administrators to defund the campus paper that ran his column. … Read more.

Aryssa, a conservative student at Yale University, told Fox News about the liberalism of her school. For that, she was pressured by peers to leave the Ivy League institution. Even prior to the interview, she was harassed for her beliefs, and called a “bigot.” … Read more.

Lindsey came under fire for supporting the repeal of a city ordinance that banned discrimination based on sexual orientation and gender, arguing it did not provide substantial religious exemptions for businesses and individuals. For that she was called a “bigot” and an “awful person” and was targeted by a petition demanding her removal from a campus leadership position . … Read more.

Jonathan often penned columns for the Duke Chronicle that favored conservative and libertarian principles, but one apparently went too far: He called out the black community for being its own worst enemy at times. After that, he was savagely smeared in a student-led petition demanding Chronicle editors fire him, calling his views “racist” and “unsafe.” … Read more.

TARGETED FOR: Questioning the progressive “I Too Am USC” initiative (May 2015)

Jacob, USC College Republicans president, dared question an “I Too Am USC” campus initiative that decries his campus as racist, and he also voiced concern that his status as a Republican student on campus often prompts weird looks and judgment from left-leaning peers. For that, he was accused of white privilege, oppression, discrimination and appropriation. … Read more.

Omar wrote a satirical op-ed that highlighted the absurdities of the left. After it ran, he was kicked off the mainstream student newspaper. Soon after that, his dorm room was hit by vandals who labeled him a “dick” and “scum,” and posted a devil image as well as covered the doorway with eggs, gum and hot dogs. … Read more.

TARGETED FOR: Reporting that students were told to disavow American-ness in class (2012-13)

Ryan’s article about a political science professor who asked students to disregard their “American-ness, maleness, whiteness, heterosexuality, middle-class status” when writing and speaking in the classroom went viral. After that, Ryan became something of a pariah on campus, harassed and pressured by administrators and peers alike. The faculty staged an “inclusivity teach-in” to protest Lovelace, in which at least one professor called him a racist while others questioned his character. … Read more.