The University of Chicago expelled an accused student four days before graduation, despite “overwhelming evidence” his ex-girlfriend invented rape accusations to avoid embarrassment, according to a new federal lawsuit.

After her friends learned that “Jane Roe” had repeatedly lied about not having sex with “John Doe” following their breakup, Roe started a “malicious smear campaign” and eventually claimed he “pinned her to the bed and choked her” before raping her.

The university not only refused to let Doe bring a lawyer with him to his Title IX hearing, contact witnesses or cross-examine Roe, but consistently ignored objective evidence against her, including her own testimony, the suit claims.

Jeremy Inabinet, associate dean of students for disciplinary affairs, also refused to share Roe’s specific allegations until less than two weeks before the hearing, which was scheduled during finals, according to Doe.

He’s suing the university for Title IX and constitutional violations, breach of contract and intentional infliction of emotional distress. Unusually for such a case, Doe is also suing his accuser for defamation.

Roe not only accused him of criminal behavior to the university, her friends and his fraternity, but also The Chicago Maroon, he claims. (The student newspaper didn’t name him at Roe’s request but identified his fraternity as Sigma Chi.) Her statements showed “actual malice” and “willful and wanton conduct.”

'What I said in these messages is not the truth, and I just didn't want my friends to know what was going on.'

Due to the expulsion, Doe lost a job offer that was contingent upon receipt of his degree, he claims. Doe now has “severe anxiety, depression, humiliation and suicidal ideation.”

The University of Chicago received a “D” rating in the due-process report from the Foundation for Individual Rights in Education last year.

It does not give accused students “adequate written notice” of allegations or sufficient “time to prepare” for all phases of a proceeding, and deprives them “active participation” of counsel and even a unanimous finding for expulsion. FIRE also considers insufficient the university’s practices on presumption of innocence, conflicts of interest, access to evidence, cross-examination and appeals.

The administration did not respond to a College Fix request for comment on the suit.

Doe and Roe began a short-lived, intense romantic relationship within a month of meeting in October 2017, according to the suit. She spent so many nights at his apartment that Doe’s roommates asked her to contribute to the utility bill.

Their “joking and playful relationship” soured when Doe accompanied Roe on her family’s vacation to Costa Rica during winter break. They had a history of playing physical pranks on each other, “many of which” Roe initiated.

But one such prank on the trip led Roe to punch Doe in the face and dig her nails into his arm “to the point of drawing blood,” in an incident the university later blamed on Doe.

After the two returned to campus for winter quarter, Doe and Roe accused each other of “talking shit” about the other but ended up having consensual sex, as Roe herself testified.

The ex-lovers continued hooking up after Roe informed Doe that “she was only interested in a sexual relationship.” But Roe was afraid her friends would find out and “not approve,” the suit says, reproducing her text messages.

“We both talked shit to our friends and they’d all be pissed if they knew we went back to each other in any capacity,” Roe texted her friend “KH,” admitting “I might just use him for sex when I want it and have no emotional connection.”

She would eventually confess to lying to KH about subsequent encounters with Doe and hiding his name in her phone so her friends wouldn’t know they were still in contact.

MORE: UCSB gets slap on the wrist for ruining innocent student’s life

Provide witnesses to ‘incident(s)’ the university refuses to specify

The only allegedly nonconsensual encounter came March 9, when both Doe and Roe drank at a party and returned to his apartment for sex. Both admitted they wanted to “hate fuck” each other.

Roe’s friends testified she was drunk but not incapacitated at the party, including “KC,” who said she seemed to “want to spend the night” with Doe. Roe took several Snapchat videos at his apartment, later realizing her friends would know she was with Doe.

By contrast, Doe had drank so much he couldn’t maintain an erection with Roe, leading her to start a Facetime session with another friend, “CG,” from his bed. She ended the hourlong conversation to “angry fuck” with Doe. CG testified that Roe “was not incapacitated” and communicated clearly.

“Rather than admit to her friends” that she had another bout of “emotionless sex” with Doe, Roe lied that “she was too drunk to remember” how she got to Doe’s apartment or what happened there, the suit alleges.

Roe was so enraged by Doe’s accusation that she was “spreading horrible shit” about him that she threatened to “go around telling people just what a horrible person you were to me.”

She obtained a “no contact directive” against Doe ahead of a joint spring break trip with their Greek-letter organizations, Sigma Chi and Delta Gamma.

While Doe didn’t violate the directive, his practice of “constantly walk[ing] past us” with “random girls” apparently upset Roe so much that she told multiple people their March 9 encounter was nonconsensual and that Doe wouldn’t let her leave.

When she met with Associate Dean Inabinet in April, Roe repeated the same allegations but added choking, forcible penetration, blackout and awaking with Doe “inside her,” according to the suit.

Inabinet violated university rules by not providing Doe a copy of Roe’s allegations, or “any other document delineating the accusations that were being made against him,” when they met a week later. The official simply asked him about their relationship, Costa Rica, March 9 and spring break, particularly how they dealt with “anger.”

Doe had still not been given allegations more specific than “abusive behavior” and “non-consensual sexual activity” when he was asked to give a written statement ahead of an investigation and hearing. The suit notes Inabinet asked him to provide witnesses to unidentified “incident(s).”

Latest campus due process lawsuit–60th fed'l one filed in 2018–against @UChicago (lawsuit #3 vs U of C): acc'd student says univ refused to tell him specifics of allegations during inv'n,, refused to allow him to have a lawyer at the hearing; couldn't contact witnesses himself. pic.twitter.com/wy7j7D3xrs

Even when the university gave Doe access to the “investigation file” – more than a month after his meeting with Inabinet, and two weeks before the hearing – it didn’t identify the “facts” underlying the vague charges against him.

Doe was heartened that witnesses with “first-hand knowledge” of the events “overwhelmingly supported [Doe’s] denials of wrongful conduct,” the suit says. 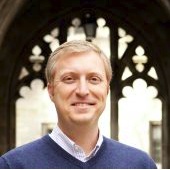 The file “made clear that Jane Roe’s allegations were not only uncorroborated, but that there were numerous, material inconsistencies in the statements she made to Inabinet (left), her written statements, and the after-the-fact comments she made to third parties.”

But the suit blames Inabinet for violating his promise to keep “character testimony” out of the investigation, saying the file was full of “second and third hand hearsay,” most of it bashing Doe.

Inabinet even included an “interview summary” from another ex-girlfriend of Doe’s and an email from Roe’s sister, “in direct violation of the Student Manual.” That led to “pointed questions” from a student member of the University-wide Student Disciplinary Committee, who Doe later learned had a conflict of interest:

The cumulative effect of these wholly improper statements, which were presented to the Committee without any cross-examination, undoubtedly had a substantial effect on the Committee. …

Inabinet stacked the deck with this witness summary despite the Student Manual’s prohibition on allowing a respondent’s sexual history with others to be considered.

Shaving-cream prank is hostile, punch in the face is not?

Only Doe and Roe testified at the hearing, from separate rooms where they could see each other’s testimony.

The committee rejected his cross-complaint against Roe for her behavior in Costa Rica, even though she didn’t deny drawing his blood with her nails and chasing him until he showed her his penis, according to the suit.

The panelists saw wrongdoing in the prank that provoked the nail-scratching, though: Doe had put shaving cream on Roe’s back in the shower.

The committee claimed he “initiated a fight” with Roe by doing this, ignoring the history of their prank-filled relationship and even Roe’s testimony that “I wasn’t upset about it.”

This is “a clear and willful mischaracterization of the evidence,” made worse by the committee playing down Roe’s subsequent “assault” of Doe as “physical contact.”

Its ruling against Doe revealed a charge that was never raised before the hearing: that he “continued to find ways to insert himself into the life of [Roe] for no other reason but to cause her emotional distress.”

The committee found him guilty of “intentionally engaging in behavior in front of” Roe on the spring break trip and attending her sorority’s event after the no-contact directive was issued. He was actually only accused of attending the “pre-event” and leaving when asked, Doe claims.

By finding that Doe “engaged in non-consensual sexual activity on multiple occasions” with Roe, the committee revealed it was not a “neutral body,” the suit continues: Roe herself repeatedly testified their sex was “consensual.”

The committee also revealed “patent bias” against Doe by criticizing him for “name-calling” and “shaming” Roe into sex, but not criticizing her for using Doe for emotionless sex.

Doe was especially outraged that the committee excused Roe punching him in the face as an “isolated event.” The student manual “does not contain a ‘one-punch’ rule that allows its students one free punch to the face of another student.” In contrast, the committee faulted Doe for spitting on Jane during the shower argument.

The committee also downplayed Roe’s admission that she repeatedly tried to tear down Doe’s underwear to see his penis on the Costa Rica trip, saying it was not “severe or pervasive.” This is “yet another illustration” of its bias against Doe.

Neither of the rulings in favor of Roe’s complaint and against Doe’s cross-complaint “was grounded in the evidence presented before the Committee,” the suit says. “Rather, both were arbitrary, capricious and based upon a discriminatory intent to favor the female student, Jane Roe, over the male student.”

Full U of C lawsuit is here; in addition to troubling facts, contains the same type of allegations of investigatory bias leveled against the same U of C TIX officer whose conduct was at play in the other two lawsuits against the school.https://t.co/tKoImNQH2F