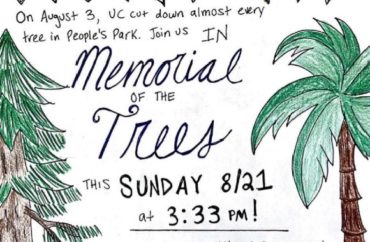 More paganism out of our nation’s elite universities

Students mourned the trees cut down to make way for new dorms at the University of California Berkeley.

The memorial service on Sunday involved an “open-mic” where activists could express their thoughts and feelings.

“During the open-mic portion of the memorial, people expressed support for People’s Park, voicing stories about the park, reciting songs, praying and dancing,” the student newspaper The Daily Californian reported.

The day “began with a morning art session to decorate a memorial to the park’s redwoods and palm trees and the garden’s fruit trees that were cut down,” the student newspaper reported.

“Community member Elisa Smith said many of the felled trees had been planted in memory of community members who advocated for the park in the past and that activists have arranged to build altars at the trees’ stumps,” the campus newspaper reported.

I will throw out a theory here that liberals, often critical of religion, will search for ways to fill the void that faith often fills for other people.

It must be noted that their Sunday event included prayer, music, sermons and altars. On a Sunday. Where did they get that idea from?

It is reminiscent when Union Theological Seminary appropriated the Catholic Sacrament of Confession and had students confess to plants.

“Together, we held our grief, joy, regret, hope, guilt and sorrow in prayer; offering them to the beings who sustain us but whose gift we too often fail to honor,” the New York seminary tweeted. “What do you confess to the plants in your life?”

Catholic priest Robert Sirico warned nearly 30 years ago that environmentalism “spawned a revival of pagan earth worship in the form of Gaia.”

“The premise of Gaian theory is that the Earth itself is a superorganism both living and divine,” he wrote. “The movement has found followers among feminists attracted to the idea of Mother Earth or an Earth goddess.”

Pagan worship has friends across the country from UC Berkeley, too.

Students at Yale’s Divinity School held a “pantheistic” Earth Day celebration. It included “Indigenous- and Black ecology-based with a sprinkle of cosmology and Pantheistic mysticism” and “a prayer to Prithivi, Hinduism’s personification of Mother Earth,” according to the Yale Daily News.

St. Boniface cut down the Germans’ trees to show them the folly of worshiping trees. It was wrong 1,500 years ago to worship trees and wrong today.