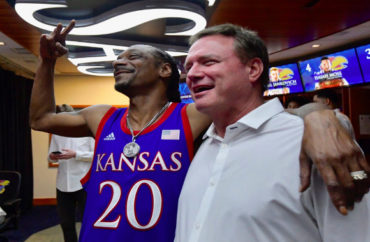 University of Kansas officials have apologized for a performance by Snoop Dogg at its annual basketball kickoff event which featured pole dancers and “fake money” shot over the heads of potential recruits.

KU Athletic Director Jeff Long said the school had expected “a clean version” of Snoop’s act at the “Late Night at the Phog” celebration. Instead, according to the Associated Press, those in attendance got unedited versions of the rapper’s hits “Gin and Juice” and “Drop It Like It’s Hot,” while ersatz $100 bills (complete with Snoop’s image) were blasted over players’ heads and pole dancers did their thing.

Long took “full responsibility” for not “throughly vetting” the entire act. He apologized to anyone offended: “We strive to create a family atmosphere at Kansas and fell short of that this evening.”

Kansas has been putting on Late Night for 35 years, but what began as a scrimmage to celebrate the start of basketball practices has turned into a night of skits, music and entertainment.

None of them brought the cache of Snoop, though. The 47-year-old rapper and well-known sports fan was expected to take the minds of players, fans and recruits off the specter of the NCAA investigation and turn attention fully to a season in which the Jayhawks are expected to be title contenders.

The school even promoted his appearance with a social media video of Hall of Fame coach Bill Self wearing a gaudy chain and Adidas shirt — the focus of the NCAA inquiry has been on the apparel company’s dealings with recruits, including whether officials paid them to steer them to its schools.

Self told a local paper he had expected “radio edited” versions of Snoop’s tunes, adding that the performance wasn’t the “direction anybody at our school” wanted to go and was “not the right way to provide the entertainment.”