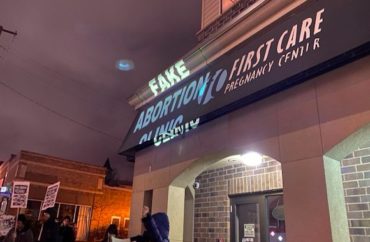 Approximately 20 students at the University of Minnesota are unhappy with the state’s abortion status quo, and “crisis pregnancy centers” are part of the problem.

Led by the UM chapter of the Students for a Democratic Society, on November 11 students set their sights on the First Care Pregnancy Center which they claim “use[s] religious sentiment to prevent pregnant people considering an abortion from seeking one.”

According to The Minnesota Daily, students also don’t like how First Care markets itself.

The Climate Justice Committee’s CJ McCormick claimed that the government “want[s] to control women’s bodies and want[s] to control our reproductive health,” and said the U.S. Supreme Court wants to overturn gay marriage and “strip away” other gay — and trans — rights.

In an email statement to the Minnesota Daily, First Care’s Director of Client Care Amanda Salmon said it is a faith-based organization and does not force conversations about religion onto patients.

“If clients want to ask questions or get help and support around their faith (any faith), we are happy to talk about it with them and provide resources,” Salmon wrote. …

First Care refuted [Hirsch’s] claim in its […] statement, stating the information they provide about abortion is taken directly from the Minnesota Department of Health. The clinic employs licensed social workers and registered nurses that provide support and professional services and truthful information, according to the statement. …

“Those protesting our First Care center clearly do not know anything about what we do, or how we go about doing it,” First Care […] “If these protesters had ever been inside our center and/or used our services, they would know their claims are categorically not true of our centers.”

According to the report, crisis pregnancy centers get about $3 million annually from Minnesota’s Positive Alternatives Grant Program — which “promotes alternatives to abortion, such as adoption.” First Care said it does not receive such funding.