The physics professor who argued “white empiricism” somehow creates a “barrier” to black women trying to enter the sciences field recently went on a Twitter rant about the recent antisemitic attacks in New York City.

Ultimately, those attacks are the fault of white gentiles, the University of New Hampshire’s Chanda Prescod-Weinstein claimed.

According to Campus Reform, on her now-protected Twitter account (archived version is here) Prescod-Weinstein wrote on New Year’s Eve that antisemitism in the US historically has been “a white Christian problem,” and anti-Jewish feelings expressed by blacks are due to the “influence of white gentiles.”

Further, the prof wrote that people demanding black leaders speak out against antisemitism are “probably a garden variety racist[s].”

“White Jews adopted whiteness as a social praxis and harmed Black people in the process,” Prescod-Weinstein said. “Some Black people have problematically blamed Jewishness for it.”

“There is no systemic Black on Jewish violence,” the professor clarified before insisting that “Putting more police and people with guns outside of synagogues may make white Jews feel safer but it will endanger Jews of color, especially Black Jews and Middle Eastern Jews.”

Prescod-Weinstein continued her thread by proclaiming that “Reifying the Zionist project in Palestine will not lead to long term safety for Jews, especially Palestinian Jews and anyone else who isn’t a white Ashkenazi Jew.”

She goes on to blame violent attacks against Jewish people on “incarceration” in that it “is a response that begets violence” that “actively endangers” and because “prisons are a hot bed of white supremacist gang recruitment.”

She then invokes President Donald Trump, calling him the “antisemite in chief.”

“He wants you to be distracted by efforts to throw mentally ill Black people who have breathed in antisemitism into the mass incarceration complex. You choose what you do next,” she said of the President. 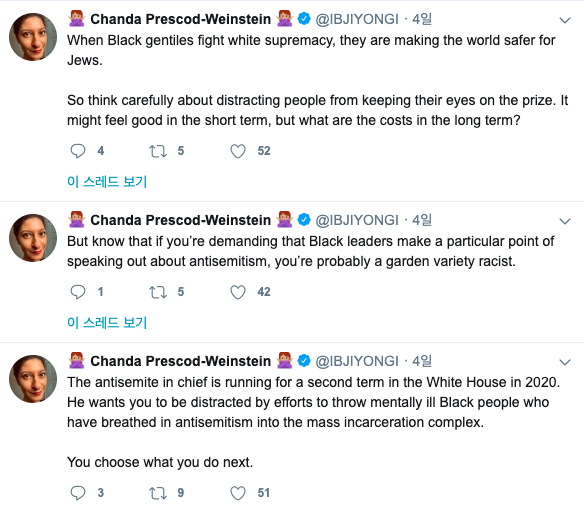 Prescod-Weinstein’s Twitter bio says she is a “Black Feminist” and “queer agender,” with locations including Durham, New Hampshire, Cambridge, Massachusetts, and … Wakanda.

In response to criticism of her “white empiricism” paper (in the feminist journal Signs: Journal of Women in Culture and Society), the prof had tweeted “‘living rent free in white empiricist’s heads’ […] new twitter bio?”