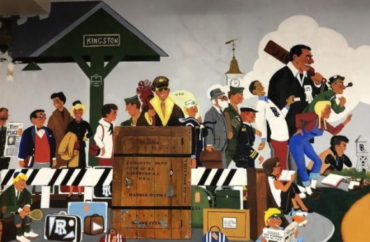 The murals, painted by URI graduate Arthur Sherman in the 1950s, came under criticism last summer because their depiction of what life at the school was like in the post-war era featured almost exclusively white people. According to the school, the paintings lacked “diversity and a sensitivity to today’s complex and painful problems.”

But the school has reversed course, saying the murals will stay, with “necessary context regarding the original intent of the murals” added. The school will also contract for a new work of art “in similar size and impact” to “depict diverse university life as it is today.”

When asked about the school’s about-face, a spokesperson directed The College Fix to a statement released after the decision.

Calling the murals “whimsical cartoons,” the statement notes the school’s eight-member Memorial Union Advisory Committee met for six months to come up with a solution that ultimately saved the murals. During this process, the school sent out 86,000 questionnaires to gauge the public’s opinion on removal of the murals, but only received 200 responses.

Sherman, a 1950 URI graduate, served as a corporal in the Army’s infantry during World War II in Alsace-Lorraine, along the French-German border. As a medic in Europe, he was wounded rescuing a fellow soldier from a shelter when a nearby grenade went off. It took a year for him to heal from his wounds.

The murals depict a commencement ceremony, a class reunion, a trip to the beach, students piled in a jalopy wearing letter sweaters and a marching band.

According to Kathy Collins, vice president of student affairs, some students who visited the Memorial Union had complained that they “didn’t feel comfortable sitting in that space.”

In an interview with a local television station, Collins cited recent deaths of black Americans at the hands of police for the school’s decision.

“I think we have to recognize the horrible incidents and the tragic murders of George Floyd, Breonna Taylor, and most recently Jacob Blake in Kenosha Wisconsin during this is heightened time and we as an institution have to look at the systems in place across this institution that maybe are not representing who we are today and representing the true diversity of URI today,” Collins said.

In September, the murals were covered and school administrators said they would not be a part of the pending renovations to the union. Instead, the school planned to take pictures of the murals and incorporate those photos into the new design.

In a statement at the time, the school said it notified Sherman that the murals would be coming down. According to the school, Sherman “took the news with grace and dignity” and he said “in good spirits,” that his gift “might have served its time.”

“We appreciate Dr. Sherman’s love of URI and his ability to capture that time period,” said Collins at the time. “We honor his military service, his athletic accomplishments and his dedicated teaching at URI. When we complete the renovations, we will invite the Sherman family to the ceremonies to thank them for their contributions to the University.”

But it was Sherman’s family that initially objected to the removal of the murals. At the time, his daughter, Pam Sherman, told The Providence Journal that the murals are “an important piece of history” and that the Memorial Union was dedicated to honor soldiers killed in World War II and the Korean War.

MORE: University to remove World War II murals because they show too many white people