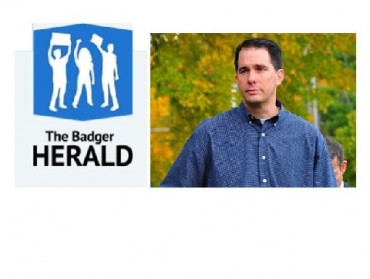 MADISON, Wis. – Over the last month and a half, the opinion pages of the student newspaper at the University of Wisconsin-Madison have been crowded with arguments against Gov. Scott Walker, suggesting – among other things – that his platform will decimate higher education, ruin the environment and hurt the economy.

The launch of the second semester here in late January coincided with Gov. Walker’s prominent thrust into the national spotlight, with his higher education reforms and presidential prospects prompting a storm of criticism within the Badger Herald’s pages.

Since late January, the campus newspaper has published 20 anti-Scott Walker opinion pieces and letters to the editor, according to a review of the Badger Herald’s online opinion section by The College Fix. Two more pieces didn’t bash Walker directly, but cast him in a negative light.

In contrast, the newspaper has only published six pro-Walker pieces in that time. In effect, published anti-Walker opinion pieces outnumber pro-Walker ones by a ratio of about 3 to 1.

What’s more, nearly all of the pro-Walker pieces are simply part of a weekly point-counterpoint feature between the College Republicans and College Democrats. But there are apparently no regular columnists who espouse support for Walker in the Badger Herald’s pages. In the last seven or so weeks, Walker has been accused of all manner of bad choices and political grandstanding within the campus newspaper’s opinion pages.

In an op-ed titled, “Candidate Walker is not concerned about higher education in Wisconsin,” author Luke Shaetzel starts by apologizing for voting for Scott Walker even though Gov. Walker froze tuition for students. Shaetzel then accuses Walker of focusing on being president and not governor.

In “Blind conservatism is moving Wisconsin in the wrong direction,” writer Omer Arain continues the popular trend of accusing Scott Walker of being more focused on running for president than focusing on Wisconsin.

“My frustration with Walker is rooted in how his policies are designed exclusively to appeal to the far right, without considering the state of Wisconsin’s best interests,” he wrote. “We are in the midst of watching the governor choose partisan appeal over his state’s welfare.”

Another letter to the editor claims “College Republicans put politics before productive debate in response to nasty emails.” In it, Mike Brown accused College Republicans of playing politics when they sent out a blast e-mail supporting Governor Walker, and then published some of the horrific responses. (The College Fix featured a story on the situation.)

While Brown says he doesn’t excuse the horrific language displayed by liberals on college campuses, he does accuse the College Republicans being condescending.

An opinion piece titled “Wisconsin State Parks are in peril due to Walker’s budget cuts” by Alex Derr warns that Walker’s budget “may kill jobs and harm the still slow job market. It will harm our parks with additional cuts. And it sends the message that parks exist for our pleasure and no other purpose.”

And another writer suggests Walker is “pushing” stances that may very well “speed up global warming.”

Another of Derr’s pieces, titled “Walker’s budget will hurt more than just students,” claims that “while the cuts deserve our attention, it is overshadowing some of the even darker aspects of Walker’s budget which hurt some of Wisconsin’s most vulnerable: the elderly, the poor and the environment.” He is also critical of Walker’s plan requiring drug testing for welfare receipts and his tax cuts that he thinks would hurt the elderly and poor.

Another op-ed takes on Walker’s desire to balance the budget by declaring “balancing a budget during economically sound fiscal years is one thing, but cutting social services during financial catastrophes is nothing but unethical.”

The Badger Herald stated on its “about” page that they maintain a maverick spirit. Reached for comment about the apparent bias against Walker in its opinion pages, editor Tara Golshan acknowledged the issue in an email to The College Fix.

“This is something we are aware of and have been making a concerted effort to address,” she said. “I assure you that our opinion section is an equal opportunity platform for all manner of opinions – as long as the arguments are well constructed, timely, factually accurate and relevant to our readership.”

“In the past academic year we have worked to reach out to conservative voices on campus,” she added. “We now have a regular column from College Republicans separate from the typical point/counterpoint with College Democrats. The Herald will continue to make these efforts. It is our goal and intention to offer a range of opinions on our page.”

3. Candidate Walker is not concerned about higher education in Wisconsin

5. Blind conservatism is moving Wisconsin in the wrong direction

6. Wisconsin State Parks are in peril due to Walker’s budget cuts

11. Walker must accept Menominee deal to save face in budget controversy (Mostly neutral, but with negative slant toward Walker)

15. Wisconsin Idea change is more than ‘drafting error’ (Mostly neutral, but with negative slant toward Walker)

16. UW split may cause higher tuition and diminish student voice

21. Letter: Concern over budget cuts is based on facts, not rhetoric

1. Letter to the Editor: Long-term flexibility for UW System will alleviate cuts

3. Washington could learn from Wis. education reforms (by College Republicans)

5. Campus should address budget with healthy debate (by College Republicans)