Specifically, The Daily Pennsylvanian reports members of Fossil Free Penn could be suspended from other student groups for participation in a homecoming game protest on October 22.

About 75 students took part in the protest (pictured) which delayed the game’s second half for over an hour. Nineteen students ended up being held by campus police.

The protest reportedly was in support of FFP’s demands that the university make a “complete divestment from fossil fuels,” make direct payments to support Philadelphia’s public schools and make “a public commitment” to preserve a housing complex.

Following the demonstration, Penn spokesperson Ron Ozio said that FFP’s antics “do nothing to advance their legitimate policy concerns, concerns the University shares, but rather impinges upon the rights of others in the community to participate in the life of the campus.” 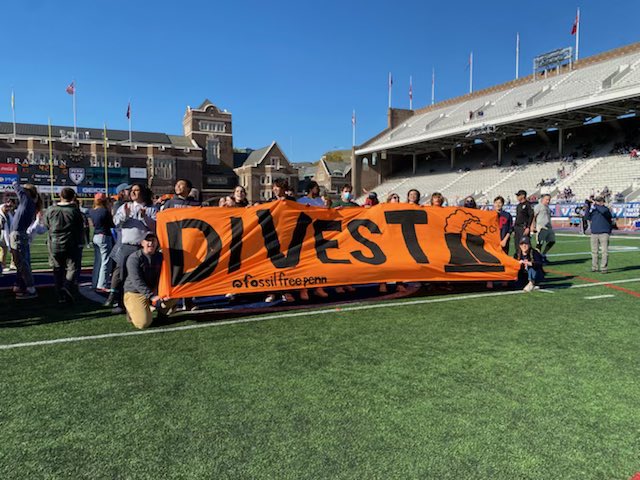 Penn sophomore and FFP coordinator Sabirah Mahmud said she was notified that her Penn Band membership is in jeopardy due to her protest participation. She currently is banned from any practice or performance “until further notice.”

According to her Linkedin profile, Mahmud began the Philadelphia Youth Climate Movement at age 16 and she told the D.P. that was “an integral part of her application” to Penn. She said the school’s group membership threat means students “have to either choose holding people accountable or participating in Penn society.”

“This new administration has only welcomed activism and community engagement with disciplinary action,” Mahmud added.

Fellow Penn Band member Katie Francis felt similarly, saying “It seems like Penn wants to protect the institution more than the students that make up that institution.”

Francis said she believes it’s “essential for Penn students and staff to be actively aware of their place in the larger Philadelphia community and to remain open to uncomfortable conversations.”

Fossil Free Penn held a days-long campout protest on the college’s Green back in April; it began another one in September which is still ongoing.