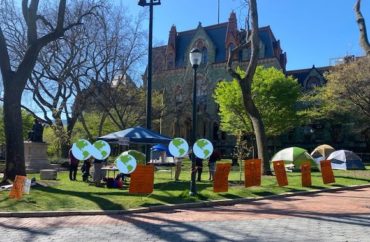 FFP began its encampment on April 19 following a “S’mores & Community” event because, in the words of member Sarah Sterinbach, “climate justice and justice for the Philadelphia community should be at the center of campus.”

Sterinbach said the almost-week-long protest was the “most successful action in FFP history.” She added “We ended it because we achieved so much, and wanted to let our organizers and participants rest, and get ready for what’s next.”

Another reason for ending the camp-out may have been possible disciplinary action, as protesters were notified by the Office of Student Conduct they had violated UPenn’s Guidelines on Open Expression. Officials say the activists “failed to end the event at the scheduled time, and failed to follow University officials’ instructions regarding leaving the area,” The Daily Pennsylvanian reports.

Twelve of the protesters were scheduled to meet with Office of Student Conduct officials on April 25 regarding the matter.

FFP rejected a separate meeting with UPenn administrators regarding the group’s demands, citing “frustration with a lack of effectiveness” of such discussions. FFP Campaign Coordinator Ari Bortman said “Our demands and how to achieve them are very clear. We want a plan of action, not another stalling meeting.”

Last Wednesday, 49 UPenn faculty members signed on to a letter supporting Fossil Free Penn, and noted the group had been praised by an ambassador from the Maldives.

“We believe that student activists are right to call for Penn to do more and we support their peaceful protest,” the letter reads. “We are concerned that Penn administrators have summoned a group of students to a disciplinary meeting. Sit-ins and campouts have long been part of the way effective protest happens in the United States. We want to see that tradition respected.”

Of note, only three of the 49 faculty come from departments outside the humanities: pediatrics, chemistry and computer science.

Read the article and faculty letter.

MORE: Climate protesters camp out at U. Penn to demand fossil fuel divestment