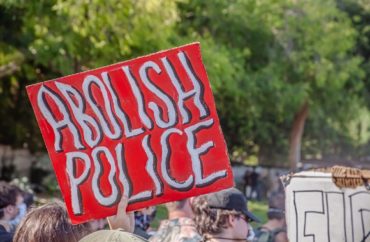 The fact that Philadelphia is on a record-setting pace for the number of killings in a year, the University of Pennsylvania group Police Free Penn was undeterred, and held its “Abolition Festival” on Thursday to hopefully, well, just that — abolish the campus police force.

Police Free Penn began in June of 2020 and promptly issued demands including a “decriminalization of Blackness,” “reinvest[ment] in community-controlled funds” and the removal of all cops from U. Pennsylvania (complete with a proclamation that “This means, yes, FUCK PENN POLICE …”).

PFP also claimed at the time it had over 12,000 supporters. But Thursday’s gathering only drew about 100 people, even given its location “at the center of campus,” according to The Daily Pennsylvanian.

Freshman Connor Nakamura said of the festival it’s “important for students to stay engaged and participate in events advocating for social justice on campus.” Sophomore Jack Starobin noted listening to different views on police abolition “revealed the struggle of different communities grappling with these issues.”

Starobin added that “reform steps and little demands incident by incident are not going to get us to where we need to be.”

Berg said she is an advocate for institutions of higher learning to be at the forefront of what they teach and give back to the community they belong to. She urged students to use their position as Ivy League students to think about how their careers and life choices will relate to other people and communities.

“I want [students] to start thinking about what a world without police would look like and to really open up their imagination,” Berg said.

Festival organizer KC Legacion said “[police] abolition is not on most students’ radar,” and that Penn officials have “not been receptive” to Police Free Penn’s demands.

This might be because November 2021 looks quite a bit different than June 2020. Even though Philadelphians inexplicably re-elected far-left district attorney Larry Krasner on Tuesday, the defund-the-police movement took hits in other progressive enclaves.

For example, in Minneapolis, where George Floyd’s murder birthed the defund movement, voters said “no” to a measure which would have replaced cops with social workers. It seems constituents didn’t appreciate the fact that the last 20 months have accounted for “almost a quarter of the city’s 70,000 reported gunshot incidents since 2008″ (emphasis added).

New York City Mayor-Elect Eric Adams won the Democratic primary because his anti-crime rhetoric was (much) tougher than his opponents’. Across the state in Buffalo, the socialist candidate who won the Democratic mayoral primary — and who called for “redirecting $7.5 million from the Buffalo Police Department’s budget” — was defeated via a write-in campaign by the very person she defeated in that primary.

Perhaps most significantly, Republican Ann Davison was elected the city attorney of Seattle over Nicole Thomas-Kennedy, who supported police abolition and had praised as “heroes” those who had wrecked public property during last year’s protests.

MORE: U. California system will defund police, use social workers to respond to some emergency calls