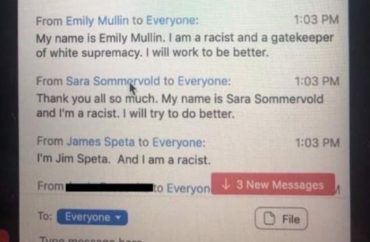 Four members of the U.S. Commission on Civil Rights have asked the U.S. Department of Education to investigate “the admitted racism of several employees at the Northwestern University Pritzker School of Law,” according to a memo the commissioners sent to department.

The Oct. 21 memo points out that “during a recent online town-hall meeting, several employees publicly admitted that they are racists, and one even admitted to acting as a ‘gatekeeper of white supremacy.'”

The letter, signed by four members of the eight-member panel and written only on behalf of those four commissioners, is in reference to an online townhall meeting that took place August 28 during which Northwestern University law school faculty and other employees called themselves racists as they introduced themselves.

Northwestern U. law school had a town hall meeting online recently. Everybody began w/ a ritual denunciation of themselves as racist. Reader: "Prof. Speta is not a racist. He is a wonderful man universally loved by students. It makes me sad that he is forced to say otherwise." pic.twitter.com/O45UX8ver2

Included in this number of admitted racists was James B. Speta, the law school’s Interim Dean and the Elizabeth Froehling Horner Professor of Law. The Pritzker School of Law participates in Title IV federal financial-aid programs, and thus must abide by Title VI of the Civil Rights Act of 1964, 42 U.S.C. § 2000d, which provides that “[n]o person in the United States shall, on the ground of race, color, or national origin, be excluded from participation in, be denied the benefits of, or be subjected to discrimination under any program or activity receiving Federal financial assistance.”

A spokesperson for the Education Department told The College Fix the department has received the memo and that it is under review.

Northwestern media affairs representatives did not respond to emails Friday and Monday from The College Fix seeking comment on the memo.

In September, The College Fix repeatedly sought comment from noted faculty who took part in the exercise. They all refused comment.

According to a Washington Free Beacon report, an inside source who did not wish to be named for fear of retribution said the training was optional and aimed to teach faculty and staff how to be an “ally” to people of color on campus.

“The source said there were more than 100 people at the event and that dozens of attendees repudiated their own racism,” the Beacon reports. “The meeting followed a letter sent out by the dean of Northwestern Law School, which outlined a commitment to ‘anti-racism’ in hiring and admittance practices.”

Writing for Powerline, Paul Mirengoff did not mince words in describing the situation at Northwestern:

The only decent thing for Speta to do is to resign — not just as interim dean, but as a professor at the law school. Avowed racists shouldn’t be running a law school or teaching students. If Speta doesn’t step down, Northwestern should fire him. If not for being a racist, then for being an idiot. …

The event sounds more than vaguely Maoist to me. Instead of confessing to be a “running dog of capitalist imperialism,” members of the Northwestern law school ruling class confessed to being racist gatekeepers of white supremacy.

The Department of Education should launch an investigation of Northwestern’s law school, which, because it participates in Title IV federal financial-aid programs, is barred from discriminating on the basis of race.

As for the memo’s reference to the Princeton matter, it refers to an investigation the Education Department launched in September into the Ivy League university after its President Christopher Eisgruber declared in an open letter to the campus community that racism is embedded in the institution.

Meanwhile, the Education Department is facing pressure to drop the investigation into Princeton from some.

Inside Higher Ed reports the “American Council on Education and 55 other higher education groups said that investigating universities for violating civil rights laws for acknowledging the existence of institutional racism would have a chilling effect on institutions confronting their problems.”

Inside Higher Ed also reports that key Democrats on the House education committee have written a letter that calls on the Education Department to drop its Princeton probe.

MORE: Northwestern law faculty refuse to explain why they introduced themselves as racists