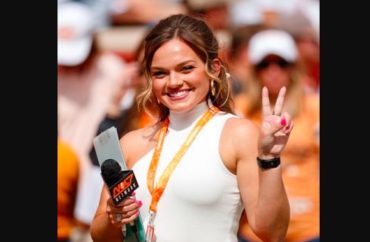 A 26-year-old female sports reporter at the University of Tennessee is no longer employed after tweets from her teenage years, which included the term “ni**a” (note the “a”), recently surfaced.

OutKick reported October 26 that Kasey Funderburg, a UT graduate, was fired by the school following revelation of the tweets; however, the Knoxville News Sentinel reported three days later that Funderburg actually had resigned, citing a statement from the UT athletic department.

According to the former, ironically Funderburg’s tweets were discovered after she admonished Richard G. West, a parody and “popular troll account” in Tennessee sports discussions, for attempting to fool UT fans into painting their faces black to go along with the football team’s Saturday black uniforms.

“THIS IS A FAKE ACCOUNT and it’s disgusting that this person thinks putting out a joke like this is okay,” Funderburg tweeted. “Please don’t believe everything you read on Twitter.”

But soon after, another Twitterite found the allegedly offensive Funderburg tweets from 2013 and 2014.

Didn’t use them in a bad way? pic.twitter.com/bVDA0I8OGs

A Change.org petition, currently closed with 1,048 signatures, was started a week ago calling for Funderburg’s reinstatement.  Its creator told OutKick “We want Kasey to know we are here to help and want her to have her job at Vol Network back and we know what she said was wrong but she clearly has changed because she was trying to stop someone racist …”

Funderburg’s bio page no longer appears on the University of Tennessee website.

MORE: Who gets to decide what’s offensive?

MORE: Study: Whites think being called N-word by blacks is a friendly gesture