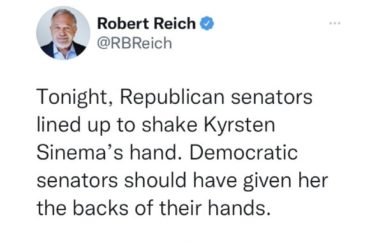 “Tonight, Republican senators lined up to shake Kyrsten Sinema’s hand,” Professor Robert Reich wrote early Thursday morning. “Democratic senators should have given her the backs of their hands.”

The comment came after the Arizona Democrat joined with West Virginia Democrat Joe Manchin and Senate Republicans to oppose an attempt to eliminate the filibuster.

Reich deleted the tweet but a screenshot is available (pictured).

He posted a follow-up comment this afternoon that said he did not mean to suggest violence, but instead was using an “idiom.”

“Last night I deleted a tweet because it was widely misinterpreted and distorted by conservative media,” he wrote.

He said the phrase “back of the hand” did not represent a literal suggestion, but “is an idiom for rebuke.”

Last night I deleted a tweet because it was widely misinterpreted and distorted by conservative media. “Back of the hand” is an idiom for rebuke. I wholeheartedly condemn violence against women.

Sinema has been the target of harassment for her political positions before, including at Arizona State University, where she teaches social work courses.

A group of illegal immigrant students followed her into the bathroom to tell her to support President Joe Biden’s Build Back Better legislation and amnesty.