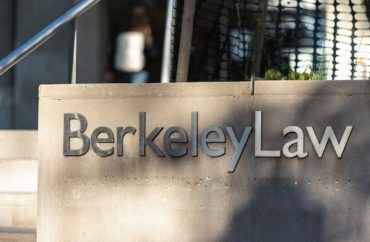 In the name of “protecting the ‘safety and welfare of Palestinian students on campus,” nine UC Berkeley School of Law student groups will not invite speakers who have “’expressed or continued to hold’ Zionist views or support pro-Zionist events.”

So announced the Berkeley Law Students for Justice in Palestine, or LSJP, in mid-August, The Daily Californian reports.

In a statement, the LSJP said “We have encouraged student groups to boycott the apartheid state [Israel] and not lend platforms to speakers who support the Zionist project of genocide and apartheid. The student organizations that have democratically voted to adopt the bylaw have done so in rejection of the Zionist ideology and in solidarity with Palestinian students at Berkeley Law.”

In response, the Jewish Students Association at Berkeley Law said “In considering which organizations to join, students should not be forced to choose between identifying as either ‘pro-Palestine’ and thereby ‘anti-Israel,’ or ‘pro-Israel’ and thereby ‘anti-Palestine.’”

The nine groups’ stance is part of the Boycott, Divestment and Sanctions, or BDS, movement.

UC Berkeley School of Law Dean Erwin Chemerinsky noted his concern about the ban and free expression in an August 25 email, saying “To me, a law school should be a place where all views should be expressed, and to say that we’re not going to invite speakers with a particular viewpoint is inconsistent with that.”

Chemerinsky said that while he supports the rights of students to follow the bylaws, there are aspects of the statement that he finds “deeply distressing.” …

“It’s inconsistent with the First Amendment that says that government entities can’t discriminate on the basis of viewpoint.”

In an Aug. 29 statement responding to Chemerinsky’s email, LSJP wrote that free speech and the expression of ideas “cannot be romanticized” when the product of that argument causes “harm to marginalized communities.” The LSJP also noted that the bylaw was an “absolutely” tenable action, as affinity groups chose to incorporate the bylaw through a democratic vote.

Chemerinsky said that those who believe there are human rights abuses in Israel and adjacent territories should have the right to say so. “But those who want to defend Israel should be able to express that as well.”

MORE: UC Berkeley officials shoot down student government demand to side with Palestinians