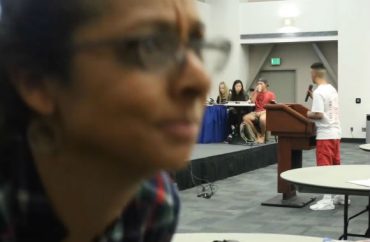 ‘She was within her rights not to grant permission’

The College Republicans at the University of California-Santa Barbara are accusing a dean of physically attacking two alumni CRs as they recorded a raucous student government meeting last week.

The outrage against the CRs at the meeting, they say, stemmed from a clerical error in the minutes from a previous student government meeting, which suggested a student-funded CRs event was racist.

The hubbub at UCSB follows a resolution approved by the student government this spring that affirms “the right to free expression” and asks the administration to revise speech codes.

The administration told The College Fix that Dean of Student Life Katya Armistead “denies grabbing anyone’s cell phone” but claims she had the right not to be recorded at the public meeting. Bad transcription: ‘Lies’ are the ‘Legacy of #BlackLives’

A week ago, the CRs were celebrating the student government’s decision to fund their event with conservative speaker Ben Shapiro, editor in chief of The Daily Wire.

Only two days later they were defending their right to host it at all, amid student-led backlash.

At a meeting Oct. 31, the student government’s Finance and Business Committee had approved $5,000 from student funds for the event.

Shapiro’s talk was presented to the committee as “Lies, Prejudice and Divided People: the Legacy of the #BlackLivesMatter Movement,” but the minutes misrecorded the second part as “Legacy of #BlackLives.” Student activists were scarcely aware of the proposed event when the committee agreed to fund it, but campus activists blew up when they saw it in the meeting minutes.

Dozens of Black Lives Matter supporters mounted a “Senate BLACKout” to sink Shapiro’s event. More than 150 people appeared at the marathon six-hour Associated Students Senate meeting Wednesday, where senators were to vote on final approval of the event’s funding.

‘All Hispanic’ executive board accused of racism, white supremacy

Opponents, who comprised the majority of those who spoke, read a letter that notes the Student Bill of Rights from the Associated Students’ Legal Code prohibits senators from approving “any Bill or Resolution that discriminates against students.”

The letter characterized Shapiro’s proposed appearance, as portrayed in the “very title and description” of the event, as “an attack on the Black community.”

“Shapiro has a record of espousing transphobic, homophobic, and anti-black language, and it would be foolish to assume that this rhetoric would not appear in any talk he presented at UCSB,” the letter said.

The letter said black students at the Oct. 31 committee meeting were “triggered and offended by the racist nature of the comments made about Black people and Black social justice movements.”

Contrary to his claim, Shapiro’s “intention is not to offer critique, but rather to promote falsehoods and inaccurate allegations about the Black Lives Matter Movement,” it read. “I do find it ironic that these accusations of racism and white supremacy are thrown at an elected [CR] executive board that is all Hispanic,” CR President Andrew Gates told an unidentified senator at the meeting.

That senator had insinuated the CRs had an agenda that perpetuated “anti-blackness and racism” on social media.

No vote on free speech resolution: It looks bad

Senators held a secret ballot on the Shapiro funding in the early morning hours of Thursday, ignoring the pleas of Shapiro’s detractors. The vote was 16–5 in favor of funding, with two abstentions.

The reading of the results prompted Shapiro critic Naya Al-Anbar to yell “fuck you” toward the senators and then leave the room.

“What went on in there was the most fucked up thing in the entire world,” said Al-Anbar, according to the Daily Nexus. “Hundreds of POCs [people of color] came in and begged you not to do this, and A.S. looked them all in the eye and voted no, and they couldn’t even own up to it.” (“Hundreds” appears to be an exaggeration.)

The unexpected backlash against Associated Students led the Senate to table the planned renewal of its March resolution in favor of free expression, with senators saying they thought it would look bad in context.

“I don’t want it to be seen as anything that it shouldn’t be seen as,” said Reilly Hobson, chair of the committee that initially approved the funding, according to the Daily Nexus.

The March speech resolution remains in effect through the 2016-2017 academic year.

In a statement Friday, the CRs applauded the Senate’s decision to fund the Shapiro event.

If he asks ‘politely,’ stop filming the public meeting

The recording of the Wednesday meeting first became a flashpoint when Internal Vice President Natalie Jordan asked senators for their consent to be filmed for the livestream.

Senator Jordan Mitchell asked to not be filmed. (The Fix could not locate an archive of the Senate livestream.)

Student Rick Zierer and other CR members continued filming during Mitchell’s remarks, prompting the senator to storm out of the meeting before the vote.

“Jordan [Mitchell] politely asked you not to film him,” said Internal Vice President Natalie Jordan. “So if you could respect that, that would be really, really nice.”

Mitchell and CR members quarreled inside the meeting and then outside shortly after the public forum, as depicted by CR members’ videos.

Video of the meeting also shows a near-altercation when Armistead, the dean, confronted Andrew Cavarno and Jason Garshfield, two alumni CR members who were filming. (Garshfield had presented the free speech resolution to the Senate last spring.) “Why can’t you just turn it [the camera] off,” Armistead asked Garshfield before grabbing Cavarno’s camera.

Armistead then grabbed Garshfield’s camera, Cavarno told The Fix in a Facebook message Monday, but “immediately stopped” when Cavarno began filming her.

(Garshfield has yet to provide The Fix with video of his alleged altercation with Armistead. His camera was not recording until just after Armistead’s alleged attack, he told The Fix earlier.)

Asked for comment on Saturday, Armistead directed The Fix to UCSB media relations.

In an email Monday, the university disputed the CRs’ account of the altercation.

“She was within her rights not to grant permission to be photographed or recorded, so for the individual in question to attempt to do so was inappropriate.” Estrada didn’t provide an alternate interpretation for what Armistead believed had occurred.

It’s not clear that Armistead had the legal right to stop someone from recording her, however. According to the Digital Media Law Project, a public figure photographed in plain view would not have a “reasonable expectation of privacy” under California law.

Cavarno denied that Armistead asked not to be filmed, telling The Fix that the dean “came up on her own and stood immediately in front of the camera and tried to block us from filming the meeting.”

Pressed on whether it believed the CRs violated students’ right to privacy at the meeting, UCSB referred back to its original statement.

Shapiro called the characterizations against him “patently insane” in email to The Fix on Sunday.

“These people likely have never read or seen anything I’ve ever written or said, and are projecting their own issues into their opposition,” he said.