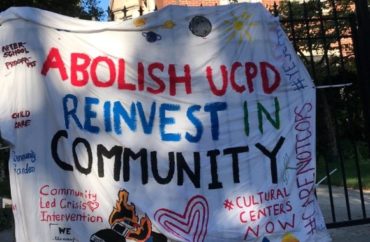 A student group at the University of Chicago promised supporters in a series of tweets that it planned to press forward with its goal to defund the campus police, even after the university rejected this demand.

The group, which calls itself #CareNotCops, said on September 4 that it will begin a year “where the Provost & Admin will not see peace or quiet.” The phrase “Care, Not Cops” is popular with Black Lives Matter supporters.

It comes after a week-long protest of Provost Ka Yee Lee’s house, a demonstration that included allegations of anti-Asian language directed at Lee. Protesters also tied themselves to a canopy in the middle of Lee’s street and chanted and sang during the demonstration, according to the student paper the Chicago Maroon.

So join us in beginning a year of building that power, and forging communities that work towards a liberatory, collective vision of the University in the process. We start at 8 PM, where we reject the admin's stalling and austerity, and embrace community & art. See ya there! pic.twitter.com/lgA4QNKIY4

No students were arrested during the protests, but “police have sporadically issued dispersal orders and cleared demonstrators’ belongings from the encampment site,” the Maroon reported.

CareNotCops ended occupation of the sidewalk outside of Lee’s house on September 4. The protest first started on August 29. The university agreed to meet with the students in a private meeting in the near future, but the activists rejected this.

An organizer with the group said in its September 4 video that CareNotCops will not participate in the proposed meetings with Lee and also accused the university of having ulterior motives.

THREAD – The Dean on Call just delivered another letter from the Provost, but it reads the same as every other: not a word about streaming or recording. After admin's shown they're fully uninterested in caring for our communities, we're rescinding our offer to meet. See why below pic.twitter.com/25eWuYCa21

“We’ve met with admin privately before, and we know that those conversations are meant to demobilize us through stalling & empty promises,” the group tweeted on September 4.

“Students of color are left to fend for themselves on this particularly violent campus, with no real place to access a liberatory education or an empowering collective space,” CareNotCops wrote in a subsequent tweet.

CareNotCops did not respond to multiple Twitter messages seeking comment from The College Fix in the past week. The group’s Facebook page, Students Working Against Prisons, is no longer publicly visible.

A spokesperson confirmed to The College Fix that the provost wants to meet with the students and explained why the administration will not defund the University of Chicago police.

“Provost Lee has repeatedly offered to meet with the group, including in June, on August 31 and again on September 4,” university spokesperson Gerald McSwiggan told The College Fix in an email.

“In the September 4 offer, which was emailed and hand-delivered to organizers, she noted that she continues to believe it is important to include the group’s perspective as the university conducts a series of listening sessions with a broad range of stakeholders.”

The president of the university and Provost Lee previously told the campus community on August 12 that the campus police department “provides a vital service in helping to keep safe and support our campus and surrounding communities.”

“We believe it is essential to continue examining our public safety function and ways in which community services provided by the university, including security and policing, can be improved,” McSwiggan told The Fix.

“Our aim is to incorporate critical perspectives about our public safety function, including the UCPD, and to work constructively with critics as well as those who have asked for more engagement from the department.”

CareNotCops has a history of pushing for an end to the University of Chicago police department. It pushed for the disarming and defunding of the police officers in 2018.

In June of this year, the activists reiterated their demand to “dismantle” the campus police department.