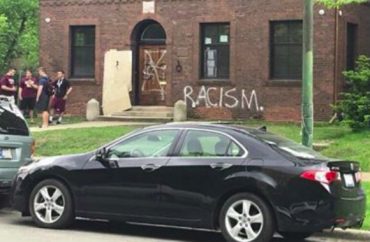 The University of Chicago chapter of Phi Gamma Delta, known casually as FIJI, has been vandalized after the university launched a bias investigation into the fraternity.

Several multicultural organizations accused FIJI of “racially insensitive” behavior because the original theme of its May 5 party was construction, though the party was not related to Cinco de Mayo and the fraternity’s house has been under renovation for two years.

The word “RACISM” was sprayed on the front of the house, according to a photo posted Wednesday on the public Facebook page Overheard at UChicago. 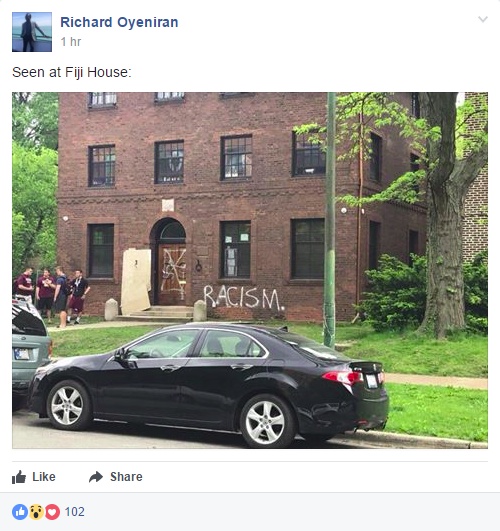 ‘The chapter is not in any trouble’

Graduate Board President Robert Tamillow told The College Fix in an email Wednesday that the graffiti has already been removed:

We have the perpetrator on video and are currently working with the University and the police regarding this matter.

FIJI’s website also went down sometime in the past few days, redirecting to a URL that reads “suspendedpage.”

A version cached on Google May 13 appears to refer to its since-completed fundraising campaign for its house renovation, while the last entry for a May 9 cached page on renovation updates is dated May 8.

The May 8 entry says the first floor and basement are “nearing completion” and the library is getting wood floors, bookcases and “fine carpentry” installed.

Tamillow said he did not know the website had gone down but that he had been “having some issues” with its web host, and it wasn’t related to any current controversy: “The chapter is not in any trouble, from the University or our International organization.”

Asked what help it is offering FIJI in response to the vandalism, and the status of any investigations of FIJI members for the May 5 party, a university spokesperson told The Fix “we are looking into the matter.” (UChicago does not recognize Greek letter organizations but can punish individual members of those organizations for their conduct in the fraternity.)

FIJI’s party has continued to be the subject of controversy.

Two complaints were filed against the fraternity for not providing water at the party, a violation of the Fraternities Committed to Safety agreement it signed, The Chicago Maroon reported.

The complaints were facilitated by the Phoenix Survivors Alliance, which advocates for alleged rape victims on campus. (FCS was set up by UChicago fraternities to prevent sexual violence in Greek life.)

And an opinion writer who is critical of the fraternity called on students to stop using memes to mock and shame FIJI:

In response to the FIJI incident, we’ve seen a welter of images that invokes the same ideology of “otherization” that our mobilized campus is so passionately against. Should we be comfortable reducing a particular fraternity (and student-athletes generally) into acerbic memetic tropes? Is this the best way to combat the very marginalization of the Other that FIJI has chosen to engage in? …

The larger issue at stake here is how the platforms of our expression represent and perpetuate the increasingly unreflecting nature of college political discourse. …

I simply want to bring our collective attention to an oft-mentioned problem—which is to say, our immediate reliance on easy answers and, more importantly, lazy platforms for expressing our political beliefs.